The Gift of Policing: Understanding Image and Reciprocity 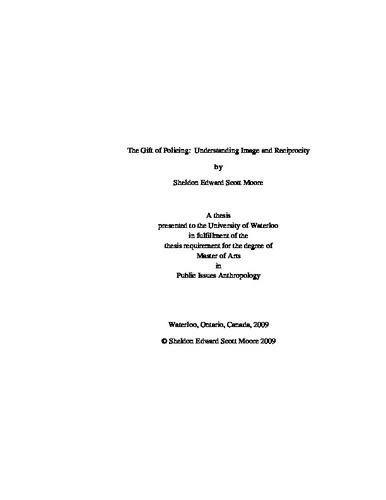 The Community Based Policing model has been adopted by the large majority of policing agencies as another tool on an officer’s duty belt that allows them to do their job more effectively and efficiently. The model is premised on the building and maintaining of relationships of the Police Service and the community it serves. The model argues that Services must ensure that the community is given a voice in the way police enforce the laws. The model encourages that the police and community work together in a partnership that is different from the traditional relationship shared between the two groups under the previous Professional Policing model. This working in partnership means that not only must the police become more open to the community providing direction in the way they do their job, but also that the community must take a more active role in the policing of their areas. This partnership could be considered an exchange of information from both the police and the community. As argued by Marcel Mauss in The Gift, relationships that are on-going and have elements of exchange have obligations. These obligations of giving, receiving and reciprocity ensure that the relationship between the groups is not only maintained, but strengthened. When one of these obligations is not met, however, there are often social consequences. This research attempts to understand the model of Community Based Policing in terms of how it is being applied by Canada’s second oldest police service, the Hamilton Police. With the model encouraging a relationship with the community, issues of gift exchange appear. Through interviews with staff of the Hamilton Police Service, as well as citizens from the community of Hamilton, how these obligations are being met, as well as the effectiveness of the model and its relation to Maussian theory of gift exchange are explored.