Are Drag Queens Sexist? Female Impersonation and the Sociocultural Construction of Normative Femininity 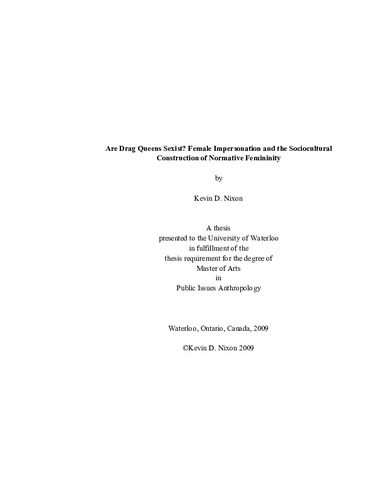 In a great deal of social scientific literature on gender, female impersonators have been framed as the example par excellence of crossgendering and crossdressing behaviour in the West. Perceived rather dichotomously as either gender transgressive or reinforcing of hegemonic gender norms, female impersonators occupy a very central position within the emerging fields of gay and lesbian, transgendered, and queer studies. Certain schools of feminist thought, dating back to the mid to late 1970s have framed female impersonators as misogynistic gay men who appropriate female bodies and a “feminine” gender from biological women. These theories argue that female impersonators utilize highly stereotypical and overly sexualized images of the feminine, in order to gain power, prestige, and status within the queer community. This study challenges popular feminist perspectives on drag, first on a theoretical level, utilizing advances in contemporary queer theory and secondly on an ethnographic level, based on a year long field study which involved both participant observation and unstructured interviews with several female impersonators and nightclub patrons at a local queeroriented nightclub in a city in southern Ontario, Canada. Aiming to understand the degree to which performers identified with the normative femininity they performed, this study argues for a more complex understanding of what motivates individuals to become drag queens, one that incorporates female impersonators unique subjective understandings of their own gender identities. Overall, this study calls for a more holistic perspective on female impersonation, which does not limit itself to any one theoretical model of drag.