Investigation of Piano Soundboard Voicing Techniques and Their Impact on Tone 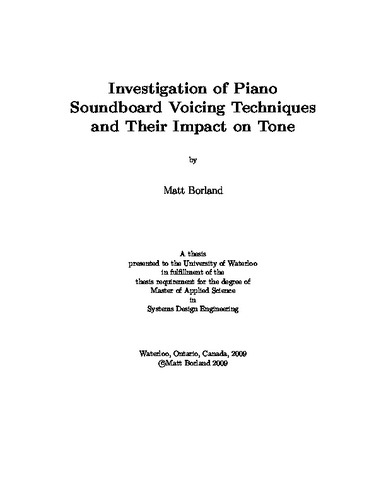 This thesis acts as a ﬁrst step in connecting the sub jective description of piano tone with quantitative measurements of changes in the vibrational and acoustical properties of a piano. Voicing techniques used by piano technicians are applied to a fully strung test piano and a series of tests are undertaken to measure the eﬀect they have on piano tone. The addition of weights and riblets to a piano soundboard, two commonly practiced methods used to change the tone of a piano and even out the transition between the low tenor and high bass bridges, are examined in detail in this thesis. Modal analysis is the ﬁrst test method applied and is used to determine the mode shapes and the modal properties of the test soundboard. The addition of small masses and riblets is shown to have the ability to change modal properties to varying degrees and connections are made between the output sound, attachment locations, modiﬁcation locations, and mode shapes of the soundboard. A new technique, piano tone mapping, is introduced as a visualization method that displays the harmonic structure of the entire piano in one image. Using the technique creates a unique ﬁngerprint of a piano that can be compared in various ways to other pianos. The piano tone maps reveal that initial magnitude and decay rate of the output sound are both decreased for notes with attachment points close to modiﬁcation locations where weights and riblets are added. Impedance testing is also conducted for a number of diﬀerent modiﬁcations. These tests reveal that riblets and weights each have their own frequency bands of inﬂuence, with the weights creating impedance changes primarily below 800 Hz and riblets creating impedance changes above 500 Hz, with a region of overlap between 500 Hz and 800 Hz. Tests also revealed that changes in impedance created by these voicing techniques were local in eﬀect, with a region of inﬂuence less than 10 cm in radius extending from the location where the weight or riblet is attached.