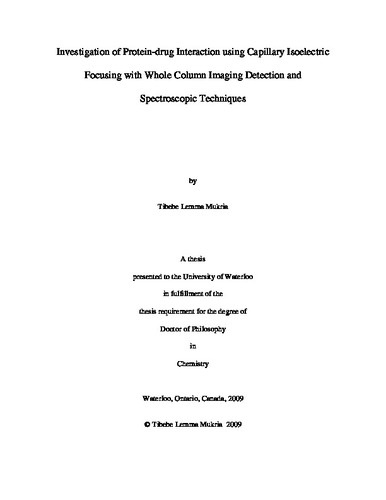 In this work, the possibilities of understanding protein-drug interactions and the possible modes of action of the drug have been was explored using capillary isoelectric focusing (CIEF) and spectroscopic techniques. The first study involves the implementation and applications of the new high performance Raman spectrometer with volume phase (VPH) based grating system, which is integrated with a short liquid-core optical waveguide for characterization and analysis of a wide ranges of molecules. The high performance Raman spectrometer has allowed us to measure solid samples with minor differences in chemical compositions. In addition, spectral characteristics of the interactions between therapeutic drugs with human serum albumin have been examined in terms of the cleavage of disulfide (S-S) bonds. The relative intensity of the Raman signal decrease as a complex formation progressed, suggesting perturbation around the disulfide bonds of human serum albumin (HSA). This spectrometer is likely to be broadly applicable for simple to moderately complex samples. Furthermore, the future perspective of combining separation and spectroscopy technologies is a novel approach for capitalizing on the strengths of the two technologies. Capillary isoelectric focusing (CIEF) with whole column imaging detection (WCID) was used to investigate the interaction of platinum-based anticancer drugs, cisplatin and oxaliplatin, with human hemoglobin A0 (Hb) and HSA. This technique facilitates the investigation and characterization of the formation of adducts between drugs and proteins. At higher drug to protein molar ratios (for both oxaliplatin and cisplatin), the results exhibit significant changes in the peak shapes and heights, which may indicate the destabilization of the protein. However, the conformational change was less evident at lower molar ratios. In addition, a major pI shift was observed for the oxaliplatin reaction mixtures (for 1:10, 1:50 and 1:100 ratios). In comparison with previously reported findings obtained by other analytical methods, conclusions were drawn about the validity of CIEF as a simple and convenient method for the investigation of protein-drug interactions. These results may provide useful information for further understanding the activity and toxicity of these chemotherapeutic drugs and improving their clinical performance. Spectroscopic evidence also shows that oxaliplatin causes fluorescence quenching of HSA by formation of on HSA-oxaliplatin complex. The Stern-Volmer equation has been used to calculate the quenching constant in the linear range. The quenching rate constants Kq at three different temperatures indicate the presence of a static quenching mechanism in the interactions of oxaliplatin with HSA. The work describes the validity of the CIEF-WCID technique for the study of protein-drug interactions and provides useful information and insight into the interaction of anti-cancer drugs with HSA concerning their further toxicity of these chemotherapeutic drugs and ways of improving their clinical performance. Finally, a novel two-dimensional (2D) protein characterization using a single one dimensional separation followed by a second characterization in the same instrument was developed. The technique combines capillary isoelectric focusing ( CIEF), which separate proteins based on their isoelectric points, with a dynamic imaging focusing and allows estimates of their molecular weights from measurement of their diffusion coefficients. This techniques applies to simple to moderately complex protein samples.