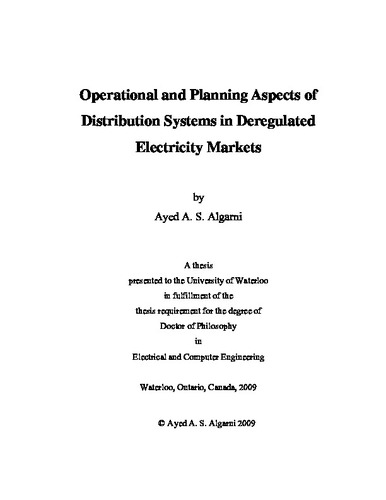 In the current era of deregulated electricity markets, the power distribution systems have attained a very important and crucial role in the industry. A distribution company (referred to as a disco) plays an active and effective role in electricity markets, and can positively impact the market efficiency and make it more reliable, secure and beneficial to customers. Therefore, operation and planning issues of discos in such electricity market environment requires extensive analysis and research in order to improve their operational strategies both in the short-term and long-term. A generic operations framework for a disco operating in a competitive electricity market environment is presented in the thesis. The operations framework is a two-stage hierarchical model in which the first stage deals with disco’s activities in the day-ahead stage, the Day Ahead Operations Model (DAOM). The second stage deals with disco’s activities in real-time and is termed Real-Time Operations Model (RTOM). The DAOM determines the disco’s operational decisions on grid purchase, scheduling of distributed generation (DG) units owned by it, and contracting for interruptible load. These decisions are imposed as boundary constraints in the RTOM and the disco seeks to minimize its short-term costs keeping in mind its day-ahead decisions. A case-study is presented considering the well-known 33-bus distribution system and three different scenarios are constructed to analyze the disco’s actions and decision-making in this context. The thesis presents a new paradigm for distribution system operation taking into account the presence of DG sources and their goodness factors. The proposed concept of goodness factor of DG units is based on the computation of the incremental contribution of a DG unit to distribution system losses. The incremental contributions of a DG unit to active and reactive power losses in the distribution system are termed as the active / reactive Incremental Loss Indices (ILI). The goodness factors are integrated directly into the distribution system operations model. This model seeks to minimize the disco’s energy costs in the short-term taking into account the contribution (goodness factor) of each DG unit. The analysis was carried out considering an 18-bus distribution network, considering two different ownership structures of DG units, and a 69-bus distribution system considering specific characteristics of wind-DG units. The concept of goodness factors is further extended to determine a new set of goodness factors pertaining to a DG’s impact on feeder unloading by virtue of its power injection. A novel long-term planning model has been developed for the disco that considers investments in DG capacity, distribution system feeder addition / expansion and substation transformers capacity addition. The model includes the new set of goodness factors pertaining to both loss reduction and feeder unloading and arrives at an optimal set of new expansion plan, with specified locations, and year of commissioning. The work clearly demonstrates the effectiveness and contribution of DG units in distribution systems both in the short-term and long-term framework.