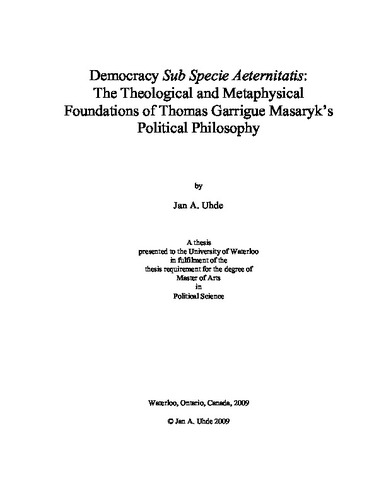 Thomas Garrigue Masaryk’s (1850-1937) reputation as one of the pre-eminent philosopher-kings of the twentieth century in Europe has not been tarnished nor has it been much revised by historians. Masaryk’s philosophical opinions continue to be studied in current academic literature, especially in the Czech Republic where the issue of Masaryk’s legacy as both thinker and politician remains alive. The author of the following thesis recognizes that although other studies have noted the religious element in Masaryk’s philosophy, they have not analysed it for its inherent theology and have therefore not made the important link between the philosophy of Thomas Garrigue Masaryk and the theology of Jan Amos Komenský (1592-1670). The following thesis examines Masaryk’s works for evidence demonstrating the fundamental place of theology in Masaryk’s political philosophy and argues that although Masaryk distanced himself from theology as ancillary to medieval theocracy, and from metaphysics as purely theoretical speculation, the fundamental assumptions upon which Masaryk constructed his political philosophy and philosophy of history were theological and metaphysical and borrowed from Komenský.