Role of Symmetry in Hisactophilin Folding 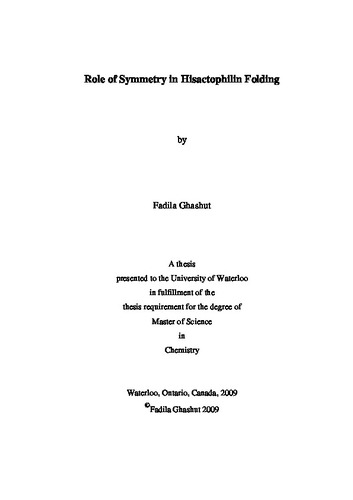 Hisactophilin is a histidine-rich actin binding protein from Dictyostelium discoideum; it is a member of the β-trefoil superfamily and exhibits a characteristic tertiary structure with three-fold symmetry. The effect of various mutations on stability and folding of other β-trefoil proteins has been studied and certain mutations that increase sequence and structural symmetry were found to increase protein stability. This study focuses on the effects of point mutations that increase symmetry on hisactophilin stability and folding designed within the core, minicore and turns of conserved and unconserved residues. The stability and folding of hisactophilin mutants were analyzed both thermodynamically and kinetically using fluorescence spectroscopy and circular dichroism (CD) at pH 6.7, 7.7, and 8.7. The stability of each mutant was measured and compared with the wild type protein (WT), and with data obtained for another β-trefoil protein, Fibroblast Growth Factor (FGF). The folding of WT and mutant hisactophilin was found to be reversible by chemically induced denaturation. Both the equilibrium and kinetic data in urea for WT and mutant hisactophilin can be analyzed using a 2-state model for the transition between the folded and unfolded state. The results indicated that H90G and I85L are more stable than the WT due to increase in the folding rate, while I93L is slightly less stable than the WT due to an increase in the unfolding rate. F6L is more markedly less stable than the WT as indicated by urea denaturation; due to protein precipitation the kinetic analysis was not performed for this mutation. F13Ymutation is less stable than the WT from CD result. and it needs investigation with DSC to confirm the stability as indicated as a future work. The results of the mutations support the notion of increased symmetry resulting in increased stability.