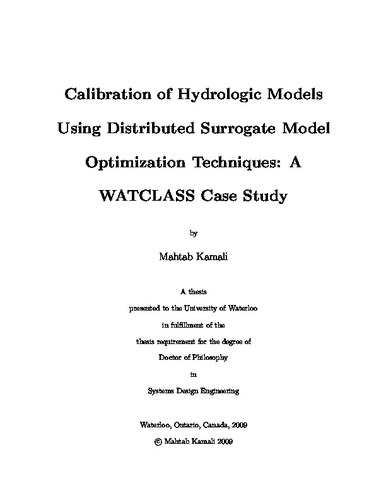 This thesis presents a new approach to calibration of hydrologic models using distributed computing framework. Distributed hydrologic models are known to be very computationally intensive and difficult to calibrate. To cope with the high computational cost of the process a Surrogate Model Optimization (SMO) technique that is built for distributed computing facilities is proposed. The proposed method along with two analogous SMO methods are employed to calibrate WATCLASS hydrologic model. This model has been developed in University of Waterloo and is now a part of Environment Canada MESH (Environment Canada community environmental modeling system called Modèlisation Environmentale Communautaire (MEC) for Surface Hydrology (SH)) systems. SMO has the advantage of being less sensitive to "curse of dimensionality" and very efficient for large scale and computationally expensive models. In this technique, a mathematical model is constructed based on a small set of simulated data from the original expensive model. SMO technique follows an iterative strategy which in each iteration the surrogate model map the region of optimum more precisely. A new comprehensive method based on a smooth regression model is proposed for calibration of WATCLASS. This method has at least two advantages over the previously proposed methods: a)it does not require a large number of training data, b) it does not have many model parameters and therefore its construction and validation process is not demanding. To evaluate the performance of the proposed SMO method, it has been applied to five well-known test functions and the results are compared to two other analogous SMO methods. Since the performance of all SMOs are promising, two instances of WATCLASS modeling Smoky River watershed are calibrated using these three adopted SMOs and the resultant Nash-Sutcliffe numbers are reported.