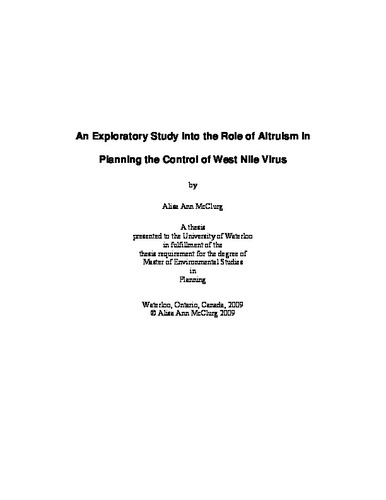 The question of how to create communities where people altruistically care for, and look out for each other’s health and well-being is increasingly a central question in academic literature. However, altruism has long been belittled or ignored in the literature in terms of its ability to influence human behaviour. This tendency appears to have been carried over into the management of West Nile Virus (WNV), a sometimes serious disease that has spread throughout North America since first arriving in 1999. Specifically, government health educators have focused only on telling the public how what are referred to here as Community Protective Measures (CPMs) such as the elimination of standing water, can reduce personal risk or protect family members from the disease, rather than explaining how these measures can help protect others in their community as a whole. As a different approach to addressing this issue, this study sought to determine which communities and people (1) were undertaking CPMs out of an altruistic concern for others in their community, or (2) could be encouraged to engage in CPMs by making salient the benefits of these measures to the community. Study results came back positive, those that live in urban areas, and married or widowed people as opposed to singles or divorcees, those with children exhibiting significantly more concern for others about the disease. Additionally, women; married or widowed people; those who have younger children (0-18 years old); and those who had certain strong positive feelings about their community, namely knowing people better in the community, being involved in the community, and having a sense that people help each other in the community; were significantly more likely to already be willing to take action against the disease at least partly for the purposes of protecting the health of others. Additionally, albeit not significantly, a trend was noted in this regard with respect to those that rented and those who had children.. With regard to those who could be encouraged for altruistic reasons to undertake CPMs, such was found to be significantly the case for those not living in an Adult Lifestyle Communities (ALCs); those living in a city, town, or hamlet for a long (11-25 years) period of time; younger individuals (18 -35 years old), and singles or divorcees as opposed to married or widowed individuals. Although not found to be significant, a trend in this regard was found with respect to those that perceived themselves to live in a small- or medium-sized neighbourhoods, urban as opposed to suburban areas, females, renters, and those without children. A pilot study in a community with the characteristics where respondents were found to respond to learning about the community benefits of CPMs, as well as efforts to instill the characteristics of places where people already tend to be altruistically inclined, is recommended. The thesis concludes by discussing how relying upon, and encouraging altruistic tendencies could be applied to a variety of issues ranging from the control of other infectious diseases, to encouraging other health promoting behaviour such as the donation of organs, to addressing wider national as well as global matters like poverty or global climate change. By doing so, health and other planners could potentially take a more holistic, less rational, and advocacy approach to planning that seeks to build community capacity to deal with problems rather than reacting on a problem-by-problem basis.

Alisa McClurg (2009). An Exploratory Study into the Role of Altruism in Planning the Control of West Nile Virus. UWSpace. http://hdl.handle.net/10012/4283