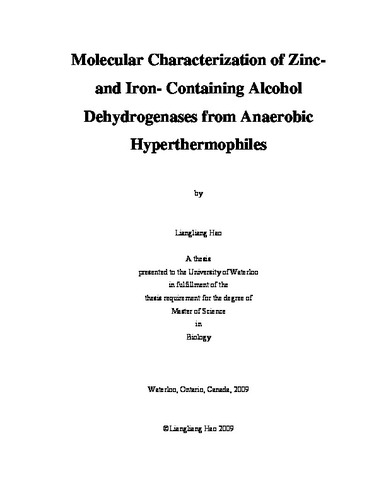 Hyperthermophiles grow optimally at 80 ºC and above, and many of them have the ability to utilize various carbohydrates as carbon source and produce ethanol as an end product. Alcohol dehydrogenase (ADH) is a key enzyme responsible for alcohol production, catalyzing interconversions between alcohols and corresponding ketones or aldehydes. ADHs from hyperthermophiles are of great interests due to their thermostability, high activity and enantioselectivity. The gene encoding ADH from hyperthermophilic archaeon Thermococcus guaymasensis was cloned, sequenced and over-expressed. DNA fragments of the genes encoding the ADHs were amplified directly from the corresponding genomic DNA by combining the use of conventional and inverse PCRs. The entire gene was detected to be 1092 bp and the deduced amino acid sequence had a total of 364 amino acids with a calculated molecular mass of 39463 Dalton. The enzyme belonged to the family of zinc-containing ADHs with catalytic zinc only. It was verified that the enzyme had binding motifs of catalytic zinc only (GHEX2GX5GX2V, residues 62-76) and coenzyme NADP (GXGX2G, residues 183-188). The tertiary structural modeling showed two typical domains, one catalytic domain close to amino-terminal (N-terminal) end and one coenzyme-binding domain close to carboxy-terminal (C-terminal) end. Since its codon usage pattern seemed to be different from that of Escherichia coli, the enzyme was over-expressed in the E. coli codon plus strain using pET-30a vector. The recombinant enzyme was detected to be soluble and active (1073 U/mg), which was virtually the same to the native enzyme (1049 U/mg). The recombinant ADH possessed almost identical properties with the native enzyme. The optimal pHs for ethanol oxidation and acetaldehyde reduction were 10.5 and 7.5 respectively, while the activity for alcohol oxidation was much higher than that of aldehyde reduction. The enzyme activity was inhibited in the presence of 100 μM Zn2+ in the assay mixture and it has a half-life of 6 hours after exposure to air. Thermotoga hypogea is an extremely thermophilic anaerobic bacterium capable of growing at 90 ºC. The gene encoding an alcohol dehydrogenase from T. hypogea was cloned, sequenced and over-expressed. The gene sequence (1164 bp) was obtained successfully by sequencing all the DNA fragments amplified from PCR. The deduced amino acid sequence was found to have high degrees of identity (~72%) to iron-containing ADHs from Thermotoga species and harbored typical iron and NADP-binding motifs, Asp195His199His268His282 and Gly39Gly40Gly41Ser42, respectively. The structural modeling showed that N-terminal domain of ThADH contained α/β-dinucleotide-binding motif and its C-terminal domain was α-helix-rich region including iron-binding motif. The gene encoding T. hypogea ADH was functionally expressed in E. coli using the vector pET-30a. The recombinant protein was expressed optimally in E. coli grown in the presence of 1 mM ferrous and induced by 0.4-0.6 mM IPTG. The recombinant enzyme was found to be soluble, active and thermostable, and had a subunit size of 43 kDa revealed by SDS-PAGE analyses. The native ADH from T. hypogea was purified to homogeneity for comparative analysis using a three-step liquid chromatography while the recombinant ADH over-expressed in E. coli was isolated by a simpler procedure including one-hour heat treatment. The activity of the purified recombinant enzyme was 69 U/mg and presented almost identical properties with the native enzyme. The optimal pHs for ethanol oxidation and acetaldehyde reduction were 11.0 and 8.0 respectively, while activity for alcohol oxidation were higher than that of aldehyde reduction. The enzyme was oxygen sensitive and it had a half-life (t1/2) of 20 minutes after exposed to air. The enzyme remained 50% activity after incubation at 70 ºC for 2 hours. Successful high-level expression of T. hypogea ADH in E. coli will significantly facilitate further study on the catalytic mechanism of iron-containing ADHs. In summary, both zinc- and iron-containing ADHs from two hyperthermophiles were successfully cloned, sequenced and overexpressed in mesophilic host E. coli, and such a high-level expression of ADH genes provides possibilities for three dimensional structural analysis by X-ray crystallography and enzyme modification by mutagenesis, which will help further explore mechanisms of catalysis and protein thermostability of iron and zinc-containing ADHs and their potential applications in biotechnology.