Dissolved Oxygen Dynamics in the Dunnville Marsh on the Grand River, Ontario, Canada 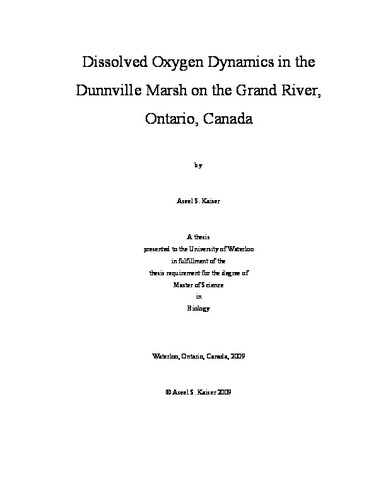 Dissolved oxygen (DO) is one of the most important environmental factors necessary to sustain aquatic life. The Southern Grand River is characterized with extensive marshes. This study focuses on the Dunnville Marsh in the Southern Grand River. The spatial and temporal variation in dissolved oxygen was studied in the Dunnville Marsh and the Grand River over a one year cycle during 2007 to 2008. Dunnville Marsh exhibited little influence on the oxygen regime of the river. The Grand River; however, could influence the oxygen regime in the marsh during the spring when waters are high but exerts little influence during the rest of the year. There were no great differences in DO between the wetland and the river during the high water spring melt period; however notable differences occurred in the summer and fall. Oxygen stable isotopes and diel O2 measurements showed that ecological factors probably were influencing the DO cycle in Dunnville Marsh, whereas both ecological and weather factors influenced the cycle in the Grand River. Monthly δ18O-DO data from the river revealed a shift towards atmospheric equilibrium compared to the wetland. These data exhibited less photosynthetic activity in the fall and more photosynthetic activity during the summer. The wetland showed higher photosynthetic activities in the summer than the river. Nitrogen input from the agricultural areas was low at most of the time and had minimal influence on the DO in the Dunnville Marsh. Despite low nitrogen input the attenuation ability of the Dunnville Marsh was apparent, presumably due to plant uptake, especially in the northern part of the marsh. Based on the δ18O-water signature in late April (after the flood season) it appears river water extended about two-thirds along the main stream well into Dunnville Marsh. River water, probably inundates a significant part of the Dunnville Marsh in early April (flood peak), when water flow was more than 10 fold higher than later in April following the peak flood season. River water can be intruded into the marsh and brought the DO to similar saturations as in the river in spring.