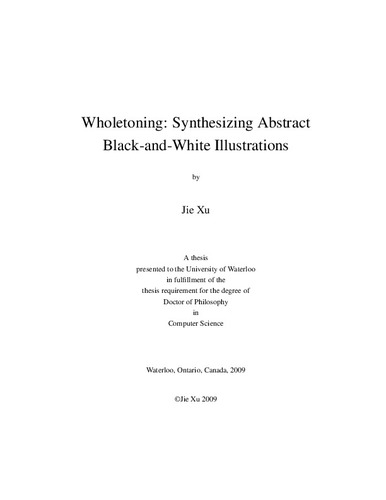 Black-and-white imagery is a popular and interesting depiction technique in the visual arts, in which varying tints and shades of a single colour are used. Within the realm of black-and-white images, there is a set of black-and-white illustrations that only depict salient features by ignoring details, and reduce colour to pure black and white, with no intermediate tones. These illustrations hold tremendous potential to enrich decoration, human communication and entertainment. Producing abstract black-and-white illustrations by hand relies on a time consuming and difficult process that requires both artistic talent and technical expertise. Previous work has not explored this style of illustration in much depth, and simple approaches such as thresholding are insufficient for stylization and artistic control. I use the word wholetoning to refer to illustrations that feature a high degree of shape and tone abstraction. In this thesis, I explore computer algorithms for generating wholetoned illustrations. First, I offer a general-purpose framework, “artistic thresholding”, to control the generation of wholetoned illustrations in an intuitive way. The basic artistic thresholding algorithm is an optimization framework based on simulated annealing to get the final bi-level result. I design an extensible objective function from our observations of a lot of wholetoned images. The objective function is a weighted sum over terms that encode features common to wholetoned illustrations. Based on the framework, I then explore two specific wholetoned styles: papercutting and representational calligraphy. I define a paper-cut design as a wholetoned image with connectivity constraints that ensure that it can be cut out from only one piece of paper. My computer generated papercutting technique can convert an original wholetoned image into a paper-cut design. It can also synthesize stylized and geometric patterns often found in traditional designs. Representational calligraphy is defined as a wholetoned image with the constraint that all depiction elements must be letters. The procedure of generating representational calligraphy designs is formalized as a “calligraphic packing” problem. I provide a semi-automatic technique that can warp a sequence of letters to fit a shape while preserving their readability.