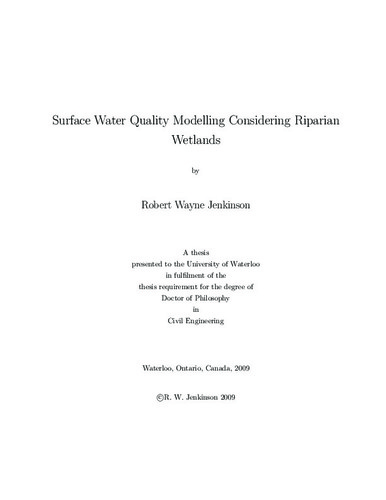 Riparian wetlands are believed to play an important role in mitigating non-point source pol- lution, acting as physical and biochemical buffers between diffuse pollution sources and receiving waters. Many studies examined riparian wetlands at the field scale, but there is a dearth of re- search at the watershed scale, particularly in the region of Southern Ontario, where agricultural land use predominates. This study examined the impacts of riparian wetlands on surface water quality at the water- shed scale. A field study was conducted on two sub-watersheds at the northern headwaters of the Canagagigue Creek within the Grand River Watershed in Southern Ontario. The two watersheds were similar in area and land use but with differing riparian wetland extent adjacent to the sub- watershed main channels. A two-year study was conducted examining the hydrology, hydraulics, water quality and nutrient fluxes from the two sub-basins. Water quality data were obtained at the outlet of each sub-basin during base-flow conditions and during 16 rainfall and snow melt runoff events. The hydrology was simulated using the WatFlood model and the water quality (nitrate and total suspended solids) was simulated using an enhancedWatFlood/AGNPS model that was modified to account for continuous simulation, in-stream contaminant fate/transport and riparian wetland influences. The hydraulics and hydrological characteristics of the two basins were distinct. The basin without riparian wetland protection (“West Basin”) exhibited ephemeral tendencies, going dry for several months in the summer, whereas the basin with extensive riparian wetland protection (“East Basin”) showed a persistent base-flow throughout the year with a consistently more rapid hydrological response. This study showed higher nutrient concentrations including nitrate, total nitrogen (TN), and total phosphorus (TP) in the West basin than the East basin, attributed to the lack of riparian wetland protection in the West sub-basin. Total Suspended Solids (TSS) concentration were higher in the east sub-basin than the west sub-basin attributed to differences in sediment grain size distributions and differences in local stream bed slope. Constituent loading estimates from the two sub-basins were conducted on an event-basis and on an average monthly load basis. This study showed that during events most constituents (Nitrate, TP, and TSS) were discharged in greater quantities from the East sub-basin than the West sub-basin for both rainfall and snowmelt events. Event-based TN loading was also higher for the East sub-basin but the difference was not statistically significant. Monthly average loading was significantly higher in the East sub-basin than the West sub-basin for Nitrate, TN and TSS. Monthly average loading was higher in the East basin than the West basin for TP as well, but the difference was not statistically significant. In spite of the generally higher nutrient concentrations in the West sub- basin, the east sub-basin exhibits higher loads due to the differing hydrological conditions in that basin. The persistent stream flow in the East basin continuously transports nutrients of a lower concentration than the West, but the consistent flow dominates the loading calculations resulting in a greater constituent mass transported. The modelling of sediment and nitrogen loading was conducted over the study period. Sedi- ment modelling results showed that the dominant process in the model was in-channel transport with the calibrated model showing very little sensitivity to overland transport parameters and riparian wetland retention. The ability to hydrologically model the basin accurately dictated the performance of the sediment transport model. Nitrogen modelling results demonstrated an ability to generally simulate the nitrogen profiles trends during storm events. However, the WatFlood groundwater storage model provided limitations in terms matching the nutrient concentration variability observed in the measured data. The processes that dominated model performance were fertilizer loading and nitrogen mineralization coefficients, with the riparian wetlands playing a small role in nitrogen removal in the calibrated model.