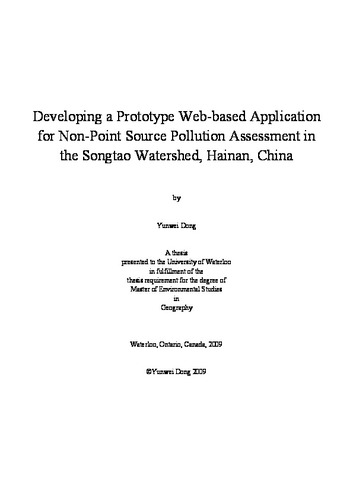 The Songtao reservoir, located in the center of Hainan province, is one of the ten biggest reservoirs in China. Since agriculture is the main industry in the watershed, non-point source (NPS) pollution is the primary pollutant source affecting water quality in the reservoir. A scientific approach is required to assess NPS pollution in the Songtao watershed in order to support planning and decision making process related to land use and water resource management. This study compared several commonly used NPS hydrological models in order to identify a suitable model for NPS pollution analysis in the Songtao reservoir. The Soil and Water Assessment Tool (SWAT) was selected as the model to be used in this research. In order to put the SWAT model to practical use, a prototype web-based application was developed to help officers in local government in China to use the SWAT model in their decision making process. In addition, spatial and non spatial data about the Songtao watershed area were collected for the SWAT model. Despite data limitations, ArcSWAT software was employed to develop relative scenarios to assess the NPS pollution in the reservoir. One land use scenario was developed to identify an environmentally sensitive basin in the Songtao watershed and the other was created to demonstrate the consequences of over-exploiting forest land in local area. The limitations of using SWAT model in Hainan province were discussed. Further research opportunities such as data collection and model calibration and validation were identified. In addition, possible improvements to the web-based application were presented.