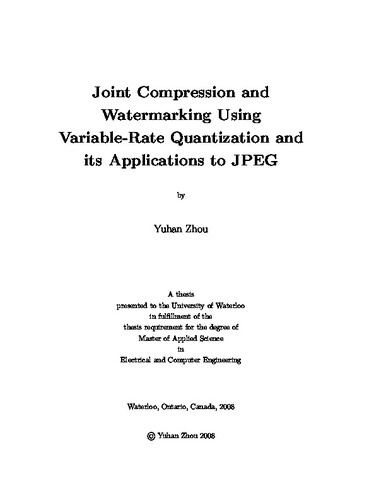 In digital watermarking, one embeds a watermark into a covertext, in such a way that the resulting watermarked signal is robust to a certain distortion caused by either standard data processing in a friendly environment or malicious attacks in an unfriendly environment. In addition to the robustness, there are two other conflicting requirements a good watermarking system should meet: one is referred as perceptual quality, that is, the distortion incurred to the original signal should be small; and the other is payload, the amount of information embedded (embedding rate) should be as high as possible. To a large extent, digital watermarking is a science and/or art aiming to design watermarking systems meeting these three conflicting requirements. As watermarked signals are highly desired to be compressed in real world applications, we have looked into the design and analysis of joint watermarking and compression (JWC) systems to achieve efficient tradeoffs among the embedding rate, compression rate, distortion and robustness. Using variable-rate scalar quantization, an optimum encoding and decoding scheme for JWC systems is designed and analyzed to maximize the robustness in the presence of additive Gaussian attacks under constraints on both compression distortion and composite rate. Simulation results show that in comparison with the previous work of designing JWC systems using fixed-rate scalar quantization, optimum JWC systems using variable-rate scalar quantization can achieve better performance in the distortion-to-noise ratio region of practical interest. Inspired by the good performance of JWC systems, we then investigate its applications in image compression. We look into the design of a joint image compression and blind watermarking system to maximize the compression rate-distortion performance while maintaining baseline JPEG decoder compatibility and satisfying the additional constraints imposed by watermarking. Two watermarking embedding schemes, odd-even watermarking (OEW) and zero-nonzero watermarking (ZNW), have been proposed for the robustness to a class of standard JPEG recompression attacks. To maximize the compression performance, two corresponding alternating algorithms have been developed to jointly optimize run-length coding, Huffman coding and quantization table selection subject to the additional constraints imposed by OEW and ZNW respectively. Both of two algorithms have been demonstrated to have better compression performance than the DQW and DEW algorithms developed in the recent literature. Compared with OEW scheme, the ZNW embedding method sacrifices some payload but earns more robustness against other types of attacks. In particular, the zero-nonzero watermarking scheme can survive a class of valumetric distortion attacks including additive noise, amplitude changes and recompression for everyday usage.