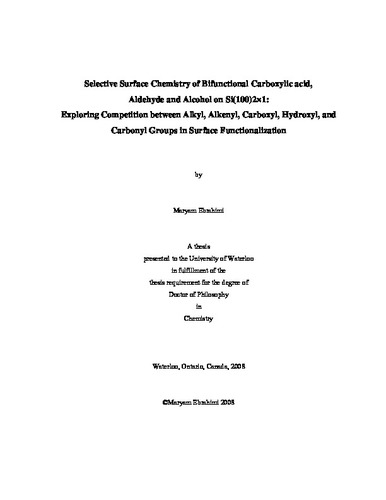 The dissociative adsorption of three carboxylic acids (acetic acid, propanoic acid, and acrylic acid), allyl alcohol, and allyl aldehyde on Si(100)2×1 at room temperature has been investigated by X-ray photoelectron spectroscopy (XPS) and temperature programmed desorption (TPD), as well as density-functional theory (DFT) calculations. The C 1s features obtained by XPS measurement for acetic acid, propanoic acid, and acrylic acid show that formation of bidentate carboxylate at a low exposure is followed by that of unidentate carboxylate at a higher exposure, with approximately equal population for both adstructures. The signatures of C 1s features attributed to methyl (285.7 eV), ethyl (285.3 eV), ethenyl (285.0 eV), and bidentate carboxyl (286.8 eV) and unidentate carboxyl (289.8-289.3 eV) carbons were observed for the studied carboxylic acids. The results showed that the carboxyl group is more reactive than the alkyl or alkenyl group towards the Si(100)2×1 surface, with O−H dissociation preferred over [2+2] C=C cycloaddition and the other plausible reaction products. This was also supported by our DFT calculation which showed that the bidentate carboxylate adstructure is the most stable configuration among the calculated adstructures for the aforementioned carboxylic acids. The combined temperature-dependent XPS and TPD studies provided strong evidence for the formation of ketene, acetaldehyde and CO from acetic acid, CO and ethylene from propanoic acid, and CO, ethylene, acetylene, and propene from acrylic acid. Furthermore, the TPD results provided further evidence for the preferred structure of the adsorbate from each of the carboxylic acid on the surface. In addition to carboxyl group, reactivity of the hydroxyl and carbonyl functional groups relative to that of ethenyl group was studied by investigating the reaction of allyl alcohol and allyl aldehyde on Si(100)2×1 at room temperature. The C 1s XPS results supported O−H dissociation for allyl alcohol and [2+2] C=O cycloaddition for allyl aldehyde over the [2+2] C=C cycloaddition. The similarity between the observed C 1s features for allyl alcohol and allyl aldehyde helped to identify the structure of the adsorption products of these two molecules on the surface. The presence of the related C 1s feature of C=C for allyl alcohol and allyl aldehyde, and the absence of C 1s feature of C=O for allyl aldehyde provided strong evidence to support that [2+2] C=C cycloaddition does not occur in the presence of hydroxyl or carbonyl groups. Furthermore, by comparing the experimental results and the adsorption energies of the adstructures calculated by DFT, it was concluded that these molecules do not react with the Si dimers through both of their functional groups, while the reaction of only one of the two functional groups is preferred on the surface. Formation of ethylene, acetylene, and propene from allyl alcohol and allyl aldehyde, simultaneously to CO from allyl alcohol, was concluded from the corresponding TPD results, which also confirm the structure of the adsorbates on the surface. The present research shows that reactions involving oxygen-containing functional groups are favoured over the other plausible reactions including [2+2] C=C cycloaddition on the Si(100)2×1. The preference of the surface to react with one of the two functional groups calls for future studies for the selective functionalization of Si(100)2×1 with potential applications in molecular electronics.