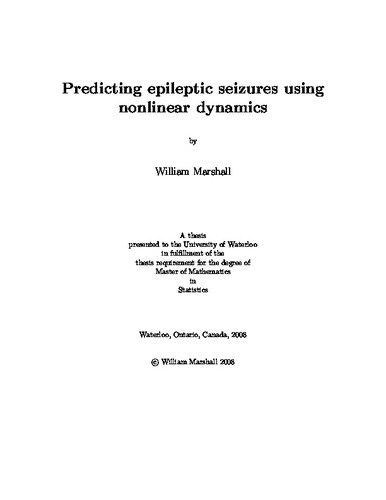 Epilepsy is a nervous system disorder which affects approximately 1% of the world's population. Nearly 25% of people who have epilepsy are resistant to traditional treatments such as medication and are not candidates for surgery [32]. A new form of treatment has emerged that attempts to disrupt epileptic activity in the brain by electrically stimulating neural tissue. However, the nature of this treatment requires that it is able to accurately predict the onset of a seizure in order to time the intervention correctly. Recent studies suggest that EEG recordings may be generated by a low dimensional nonlinear process [35] [36] [6]. This paper will investigate nonlinearity tests, as well as the use of methods from the theory of nonlinear dynamical systems in the prediction of seizures or seizure like events (SLEs) from complex time series. To do this data is generated from a nonlinear dynamical system with a stochastic time dependent parameter, which attempts to emulate the different states of an epileptic brain. Two kinds of nonlinearity tests were used in simulations, one which specifies a model in the alternative hypothesis (Keenans test) and one which simply states that the process is `not linear' (Surrogate data test). The tests were applied to the generated data, as well as a short EEG recording from a person with epilepsy and a simple nonstationary example. Both tests were able to correctly identify the model as nonlinear, neither test identified the EEG data as nonlinear and there were contradicting results when the tests were applied to nonstationary data. Estimates of the correlation dimension and Lyapunov exponent were then used to classify the preictal state of the model data. Correlation dimensions showed the best ability to classify states, so they were used in the prediction algorithm. The results of the simulation was that the correlation dimension was able to successfully predict half of the SLEs, however there was an alarmingly high false prediction rate. These results suggest that even though a complicated model may fit the data better, when dealing with prediction it is usually best to use a simple model. A simpler approach with better understood statistical properties may be able to improve on the prediction of SLEs as well as reduce the computational cost of performing them.