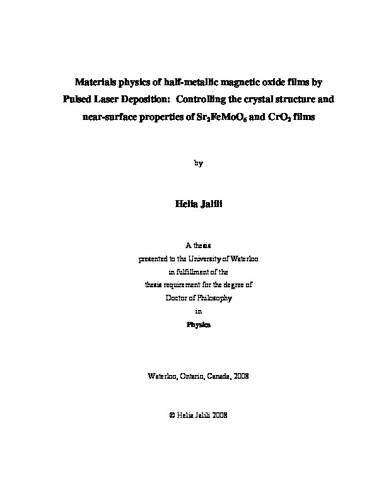 The idea of half-metallic ferromagnets was first introduced by de Groot et al. in 1983 based on their calculations. The density of state at the Fermi level for half-metallic ferromagnet is completely polarized, meaning that only one of the spin up or spin down channel exists and has metallic behaviour while the other spin channel behaves as a semiconductor or insulator. This unusual electronic structure can be seen in different materials including Sr2FeMoO6, CrO2 and Mn-based Heusler alloys. The high spin polarization degree of the half-metallic ferromagnets makes them a perfect candidate to be used as a spin-injector/detector in spin-based electronics device (spintronics). However, the degree of spin polarization of these materials, particularly in the multilayered structure spintronic devices, strongly depends on the surface/interface quality and the presence of defects, which was the subject of the present study. Pulsed laser deposition (PLD) has been used to grow two examples of the half-metallic ferromagnets, namely, Sr2FeMoO6 and CrO2. The effects of the growth conditions (deposition temperature, gas pressure, laser power, target-to-substrate distance, post-annealing) and of the substrate lattice mismatch and thickness evolution have been studied. By optimizing the growth conditions, nanocrystalline Sr2FeMoO6 films have been grown on a Si(100) substrate for the first time. This single-phase Sr2FeMoO6 film was obtained at a temperature as low as 600°C, and it exhibits a high saturation magnetic moment of 3.4 μB per formula unit at 77 K. By using glancing-incidence X-ray diffraction with different incident beam angles, the crystal structure of the film was sampled as a function of depth. Despite the lack of good lattice matching with the Si substrate, a preferential orientation of the nanocrystals in the film was observed for the as-grown Sr2FeMoO6 films thicker than 60 nm. Furthermore, effects of the deposition temperature on the epitaxial growth of the Sr2FeMoO6 films on MgO(001) have been studied by means of high-resolution X-ray diffraction. The film grown at 800°C was post-annealed in oxygen, producing epitaxial films of SrMoO4 on top of the Sr2FeMoO6 film. The corresponding magnetization data showed that the post-annealing treatment lowered the saturation magnetic moment from 3.4 µB per formula unit (or /f.u.) for the as-grown Sr2FeMoO6 film to 1.4 µB/f.u. after annealing. X-ray photoemission measurements as a function of sputtering time further revealed the presence of SrMoO4 on both the as-grown and annealed films, and their corresponding depth profiles indicated a thicker SrMoO4 overlayer on the annealed film. The intensity ratios of the 3d features of Mo4+, Mo5+, and Mo6+ for Sr2FeMoO6 remained unchanged with sputtering depth (after 160 s of sputtering), supporting the conclusion that the observed secondary phase (SrMoO4) was formed predominantly on the surface and not in the sub-grain boundaries of the as-grown Sr2FeMoO6 film. The epitaxial growth evolution of Sr2FeMoO6 films of different thickness on substrates of MgO(001), SrTiO3(100) and LaAlO3(100) have also been studied. For each thickness, surface morphology, grain size, film epitaxy, and crystal quality were determined by atomic force microscopy and X-ray diffraction (-2θ scan and reciprocal space mapping). For thicker films (~120 nm), high resolution X-ray diffraction studies revealed that SrMoO4 and other parasitic phases tend to forms on SrTiO3 and LaAlO3 substrates, but not on those grown on MgO substrates. As a second part of the project, single-phase CrO2 nanostructured thin films have been grown for the first time directly on MgO(001) by PLD from a metallic Cr target in an O2 environment. X-ray diffraction shows that these films are strained and consist of CrO2 crystallites with two possible epitaxial relationships to the substrate: either CrO2(110) or CrO2(200) is parallel to MgO(001). X-ray photoemission further confirms that the films are primarily CrO2 covered with a thin CrO3 overlayer, and indicates its complete synthesis without any residual metallic Cr.