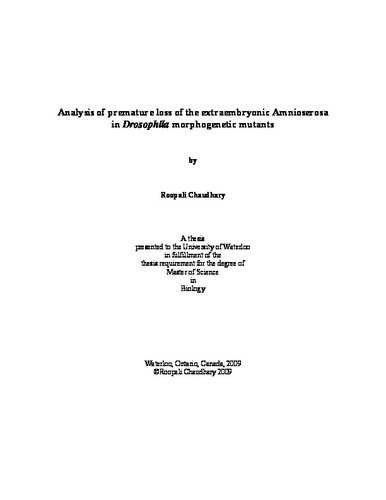 During Drosophila embryogenesis, an extra-embryonic tissue, known as the amnioserosa (AS), is required for the morphogenetic processes of germ band retraction (GBR) and dorsal closure (DC). Being extra-embryonic, the AS is not part of the embryo proper but is eliminated via programmed cell death (PCD) in the late stages of embryogenesis. Programmed elimination of the AS during normal development can be prevented by directly inhibiting apoptosis, either through the deletion of the pro-apoptotic genes hid, grim and reaper, or through the expression of the pan-caspase inhibitor P-35. PCD in the AS can also be prevented by indirect inhibition of apoptosis via inactivation of autophagy, either through activation of the InR/PI3K pathway, or through activation of the Ras signalling pathway. The timing of AS elimination is critical to development as mutants associated with premature AS loss fail in GBR. To better characterize this premature AS death, a detailed phenotypic analysis of the AS behaviour in the GBR mutant hindsight (hnt) was performed. Direct inactivation of apoptosis failed to rescue the GBR defects in hnt mutant, though the premature AS death was completely rescued. Inactivation of autophagy, however, rescued AS cell behaviour and contacts during GBR, with partial rescue of the GBR defects in the hnt mutant. The nature of premature AS loss is characterized as a possible model for anoikis, a form of cell death that is triggered through reduced cell-cell or cell- matrix contact.