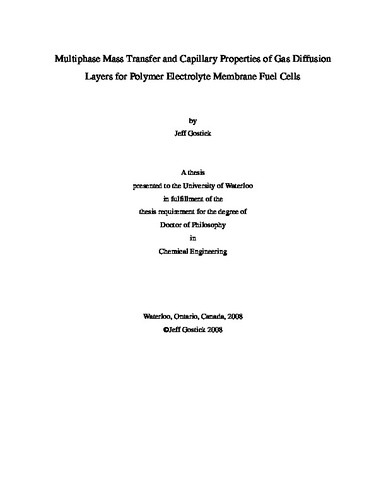 A detailed understanding of mass transport and water behavior in gas diffusion layers (GDLs) for polymer electrolyte membrane fuel cells (PEMFCs) is vital to improving performance. Liquid water fills the porous GDL and electrode components, hindering mass transfer, limiting attainable power and decreasing efficiency. The behavior of liquid water in GDLs is poorly understood, and the specific nature of mass transfer of multiphase flow in GDLs are not known. There is no clear direct correlation between easily measurable ex-situ GDL material properties and mass transfer characteristics. This thesis addresses this knowledge gap through a combination of test procedure development, experimentation and numerical pore scale modeling. Experimental techniques have been developed to measure permeability and capillary properties of water and air in the GDL matrix. Pore network modeling is used to estimate transport properties as a function of GDL water saturation since these are extremely difficult to determine experimentally. A method and apparatus for measuring the relationship between air-water capillary pressure and water saturation in PEMFC gas diffusion layers is described. The developed procedure of Gas Controlled Porosimetry is more effective for understanding the behaviour of water in GDL material then traditional methods such as the method of standard porosimetry and mercury intrusion porosimetry. Capillary pressure data for water injection and withdrawal from typical GDL materials are obtained, which demonstrated permanent hysteresis between water intrusion and water withdrawal. Capillary pressure, defined as the difference between the water and gas pressures at equilibrium, is positive during water injection and negative during water withdrawal. The results contribute to the understanding of liquid water behavior in GDL materials which is necessary for the development of effective PEMFC water management strategies and the design of future GDL materials. The absolute gas permeability of GDL materials was measured. Measurements were made in three perpendicular directions to investigate anisotropic properties of various materials. Most materials were found to be significantly anisotropic, with higher in-plane permeability than through-plane permeability. In-plane permeability was also measured as the GDL was compressed to different thicknesses. Typically, compression of a sample to half its initial thickness resulted in a decrease in permeability by an order of magnitude. The relationship between measured permeability and compressed porosity was compared to various models available in the literature, one of which allows the estimation of anisotropic tortuosity. The results of this work will be useful for 3D modeling studies where knowledge of permeability and effective diffusivity tensors is required. A pore network model of mass transport in GDL materials is developed and validated. The model idealizes the GDL as a regular cubic network of pore bodies and pore throats following respective size distributions of the pores. With the use of experimental data obtained the geometric parameters of the pore network model were calibrated with respect to porosimetry and gas permeability measurements for two common GDL materials. The model was subsequently used to compute the pore-scale distribution of water and gas under drainage conditions using an invasion percolation algorithm. From this information, transport properties of GDLs that are very difficult to measure were estimated, including the relative permeability of water and gas, and the effective gas diffusivity as functions of water saturation. Comparison of the model predictions with those obtained from constitutive relationships commonly used in current PEMFC models indicates that the latter may significantly overestimate the gas phase transport properties. The pore network model was also used to calculate the limiting current in a PEMFC under operating conditions for which transport through the GDL dominates mass transfer resistance. The results suggest that a dry GDL does not limit the performance of a PEMFC, but water flooding becomes a significant source of concentration polarization as the GDL becomes increasingly saturated with water. This work has significantly contributed to the understanding of mass transfer in gas diffusion layers in PEMFC through experimental investigation and pore scale modeling.