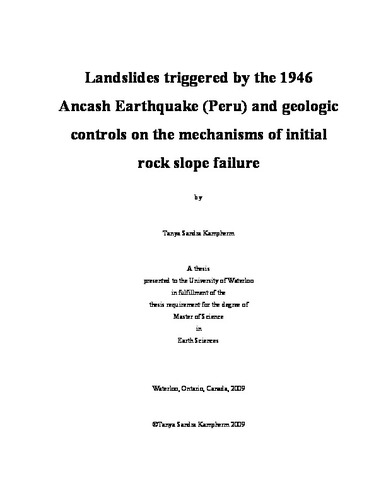 The 1946 M7.3 Ancash earthquake triggered a large number of landslides in an epicentral area along the continental divide in the Andes of Peru. Reconnaissance reports by Silgado (1947, 1951), Heim (1949) and Rüegg (1950) published shortly after the earthquake describe some of the landslides, but lack any detailed documentation. A review of literature, field traverses, aerial photograph interpretation and GIS mapping, identified 45 landslides inferred to have been triggered by the event. The cumulative volume-frequency plot shows a strong power law relation, similar in form to that derived for landslides triggered by the 1994 Northridge earthquake (Harp and Jibson, 1995). Data for the Ancash earthquake plots near the regression line calculated by Keefer (1994), and modified by Malamud et al. (2004), for earthquake moment magnitude vs. total volume moved by landslides during the earthquake. A denudation (average surface lowering) of 76 mm and a denudation rate of 0.00585 mm/yr was estimated for the area over which the earthquake-triggered landslides occurred. Rock avalanches constituted 83% of the landslides which involved Cretaceous limestones interbedded with shales. Rock slope failures were common on slopes with a southwest aspect, an orientation corresponding to the regional dip direction of major planar structures in the epicentral area. In valleys oriented transverse to the NW-SE structural trend of the epicentral area, south-westerly dipping bedding planes combined with orthogonal joint sets to form numerous wedge failures. Three rock avalanches were analysed using conventional wedge failure criteria. Two of the rock avalanches which did not satisfy conventional criteria were utilized to develop a new criteria, i.e. stepped wedge criteria. Stepped wedge failure involves wedge movement along a stepped line of intersection formed by a nearly-vertical discontinuity, striking roughly parallel to the slope, and the conventional line of intersection formed by the bedding and orthogonal joint set. The nearly-vertical discontinuity forms the essential backscarp needed to facilitate stepped wedge failure. Additional characteristics of stepped wedge failure were also distinguished based on the wedge failures studied in the epicentral area of the 1946 Ancash earthquake.