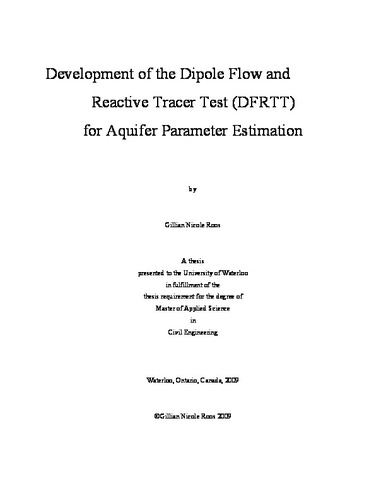 The effective and efficient remediation of contaminated groundwater sites requires site specific information regarding the physical, chemical and biological properties of the aquifer. Building on the dipole flow test (DFT) and the dipole flow and tracer test (DFTT), the dipole flow and reactive tracer test (DFRTT) has been proposed as an alternative to current aquifer parameter estimation methods. A steady-state dipole flow field is created by circulating groundwater between chambers isolated by the dipole tool. A tracer is released into the injection chamber and the breakthrough curve at the extraction chamber is interpreted with the DFRTT specific model. The overall goal of this thesis was to demonstrate the ability of a prototype dipole system to produce tracer BTCs in conventional wells installed in an unconfined sandy aquifer. The Waterloo dipole probe was constructed and field tested at CFB Borden. DFTs conducted along the length of the screen of non-filter packed monitoring wells provided similar estimates of radial hydraulic conductivity (Kr) to slug tests and literature values. The geometric mean Kr estimated in the filter packed wells was approximately an order of magnitude greater than the mean Kr estimate for the non-filter packed wells due to short-circuiting through the filter pack. A total of 46 DFTTs were completed in the monitoring wells at CFB Borden to investigate the properties of the BTCs. The shape of the BTC for a conservative tracer is affected by test set up parameters, well construction, and aquifer formation properties. The BTCs from the DFTTs completed in the non-filter pack monitoring wells were categorized into four “type curves” based on the BTC properties. The differences between the type curves were largely defined by the ratio of K between the skin zone and the aquifer (Ks/Kr). Now that a series of DFTT BTCs have been generated, the DFRTT model will be used to estimate the aquifer parameters. To continue the work outlined in this thesis, DFRTTs are planned for well-documented contaminated sites.