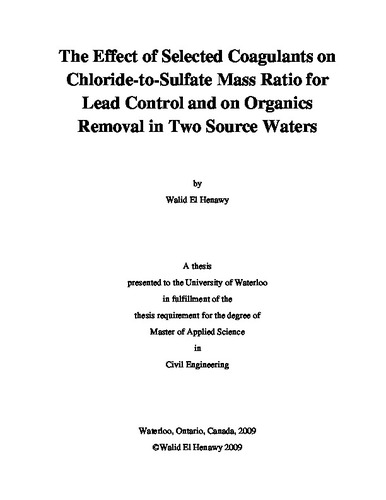 Lead is a known toxin, with the ability to accumulate in the human body from as early as fetal development. Lead exposure is known to cause a myriad of health effects which are more prominent among children. Health effects upon exposure can range from renal and heart disease or potentially cancer in adults to neurotoxicity in children. The continued presence of old lead service lines and plumbing in distribution systems as well as lead-containing solders and brass fixtures in homes may contribute lead to drinking water. Recent studies have highlighted the importance of a predictor known as the chloride-to-sulfate mass ratio (CSMR) in controlling lead release. A ratio above 0.5 – 0.6 theoretically increases the aggressiveness of lead leaching in galvanic settings, while a lower ratio controls lead corrosion. A switch in coagulant type could significantly alter the ratio. However, a coagulant switch could also trigger changes in finished water turbidity and organics, including disinfection by-product (DBP) precursors, as well as impact sludge production. Anecdotal evidence from an Ontario water treatment utility suggested the potential applicability of a newly formulated polymer, cationic activated silica (CAS), in improving DBP precursor removal when used in concurrence with a primary coagulant. No previous scientific research had been dedicated to testing of the polymer. The present research had three primary objectives: The first was to investigate the effect of conventional coagulation with six different coagulants on the chloride-to-sulfate mass ratio as it pertains to lead corrosion in two Ontario source waters of differing quality. Additionally, the effect of coagulant choice on pH, turbidity, and organics removal was investigated. The second objective was aimed at testing potential reductions in CSMR and organics that could be brought about by the use of two polymers, cationic and anionic activated silica (CAS and AAS, respectively), as flocculant aids. Finally, the performance of a high-rate sand-ballasted clarification process was simulated at bench-scale to gauge its performance in comparison with conventional coagulation simulation techniques. The first series of jar-tests investigated the effectiveness of CAS as a primary coagulant on Lake Ontario water. In comparison with the conventional coagulants aluminum sulfate and polyaluminum chloride, CAS did not offer any apparent advantage with respect to turbidity and organics removal. Testing of CAS and AAS as flocculant aids was also conducted. Results from a full factorial experiment focused on CAS testing on Lake Ontario water showed that coagulant dose is the most significant contributor to CSMR, turbidity, DOC removal, and THM control. Generally, improvements resulting from CAS addition were of small magnitude (<15%). Reductions in CSMR were attributed to the presence of the sulfate-containing chemicals alum and sulfuric acid in the CAS formulation. Testing of sulfuric acid-activated AAS on Grand River water showed that pairing of AAS with polyaluminum chloride provides better results than with alum with respect to DOC removal (39% and 27% respectively at 60 mg/L coagulant dose). Highest turbidity removals (>90%) with both coagulants were achieved at the tested coagulant and AAS doses of 10 mg/L and 4 mg/L respectively. CSMR reductions in the presence of AAS were also attributable to sulfate contribution from sulfuric acid. Bench-scale simulation of a high-rate sand-ballasted clarification process on Grand River water showed comparable removal efficiencies for turbidity (80 – 90% at 10 mg/L), and DOC (30 – 40% at 50 mg/L). Finally, six different coagulants were tested on the two source waters for potential applicability in CSMR adjustment in the context of lead corrosion. The two chloride-containing coagulants polyaluminum chloride and aluminum chlorohydrate increased CSMR in proportion to the coagulant dose added, as would be expected. Average chloride contribution per 10 mg/L coagulant dose was 2.7 mg/L and 2.0 mg/L for polyaluminum chloride and aluminum chlorohydrate, respectively. Sulfate-contributing coagulants aluminum sulfate, ferric sulfate, pre-hydroxylated aluminum sulfate, and polyaluminum silicate sulfate reduced CSMR as coagulant dose increased, also as would be expected. The highest sulfate contributors per 10 mg/L dose were pre-hydroxylated aluminum sulfate (6.2 mg/L) and ferric sulfate (6.0 mg/L). The lowest CSMR achieved was 0.6 in Lake Ontario water at a 30 mg/L dose and 0.8 in Grand River water at a 60 mg/L dose. Highest DOC removals were achieved with the chloride-containing coagulants in both waters (35 – 50%) with aluminum chlorohydrate showing superiority in that respect. DOC removals with sulfate-containing coagulants were less, generally in the range of 22 – 41%. Specificity of critical CSMR values to source water needs to be investigated. Additionally, long term effects of sustained high or low CSMR values in distribution systems need to be further looked into. Finally, the effect of interventions to alter CSMR on other water quality parameters influencing lead corrosion such as pH and alkalinity still represent a research deficit.