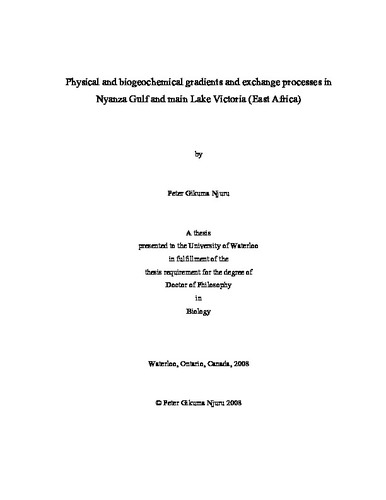 Nyanza Gulf is a large, shallow and long river-influenced embayment located in northeastern Lake Victoria. The gulf opens to the main lake through the narrow and deep Rusinga Channel, the exchange zone between the two ecosystems with different physical chemical and biogeochemical conditions. The main goals of this study are to characterize physicochemical and nutrient gradients along the gulf-main-lake transect, characterize and quantify the water and nutrient fluxes between the gulf and the main lake, and assess the response of phytoplankton community and photosynthesis to the spatially varying physical and nutrient conditions along the study transect. Between March 2005 and March 2006, measurements of physicochemical profiles as well as nutrient and the phytoplankton community analysis were conductued monthly along the study transect. Additionally, analysis of different surficial sediment phosphorus fractions was done in order to asses the potential role of bottom sediment in contributing to phosphorus enrichment in the lake water column. A box mass balance model was used to calculate the exchange of water and nutrient fluxes between different zones along the study transect and to estimate ecosystem metabolism in the gulf and the channel. Spatial variability in physicochemical and biogeochemical conditions was observed along the study transect, especially between the shallow and river-influenced inner-gulf, the deep and physically active Rusinga Channel, and the main lake, mainly in response to river inputs and varying morphometry along the study transect. The gulf had significantly higher electrical conductivity (EC), turbidity, total nitrogen (TN), and dissolved reactive silica (DRSi) but the levels declined monotonically along the channel in response to mixing with the main lake water. The channel and the main lake had, respectively, significantly higher dissolved inorganic nitrogen (DIN) and soluble reactive phosphorus (SRP) compared to the gulf. Spatial variability in morphometry and exposure to varying wind forcing lead to differential mixing and differential heating and cooling along the transect, resulting in density driven fronts and horizontal exchange of water and nutrients between the gulf and the main lake. Upwelling and downwelling maintained mixing conditions in the channel which consequently influenced nutrient recycling, the light environment and hence affecting phytoplankton community composition and productivity. The net residual water flow from the gulf to the main lake was 36 m3/s but the mixing flux was approximately 20 times higher and both fluxes accounted for a gulf exchange time of 1981 days. The advective and mixing fluxes between the gulf and the main lake resulted in net export of dissolved inorganic phosphorus (DIP; 400 kg P/d) from the main lake into the gulf and net export of DRSi (10 t Si/d) from the gulf into the main lake. In the deep, narrow and physically active Rusinga Channel there was net production of dissolved nutrients whereas in the gulf there was net consumption of dissolved nutrients, which helped to maintain high net ecosystem production (NEP; 566 mg C/m2/d) in the gulf in contrast the channel which showed net heterotrophy. The high NEP in the gulf and the associated high nutrient demand coupled with possibly low SRP to DIN supply ratio lead to P limitation of algal growth in the gulf as indicated by all indicators of nutrient status. This has important implications for management since increased P input into the gulf will translate into increased algal blooms in the gulf and therefore compromise water quality. Spatial variability in physical conditions and nutrient status along the study transect influenced phytoplankton community composition and photosynthesis. The shallow and turbid gulf was dominated by cyanobacteria but diatoms dominated in the channel in response to reduced turbidity and increased physical mixing and nutrient availability (DRSi, SRP). In the main lake seasonal stratification and deep mixing depth favoured both cyanobacteria and diatoms. The phytoplankton community in channel had a higher photosynthetic capacity (Fv/Fm, PBm) compared to both the gulf and the main lake.