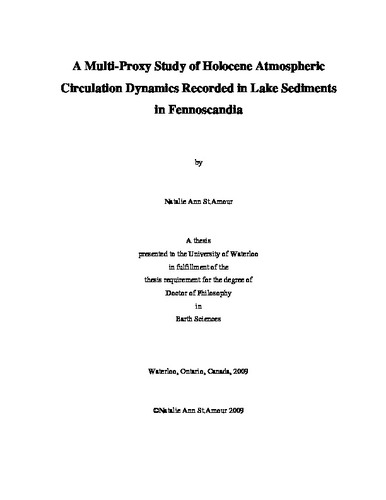 Cellulose-inferred lake water oxygen-isotope records were obtained from five throughflow lakes situated along a north-south transect across Fennoscandia to help develop a better picture of Holocene changes in atmospheric circulation in the region. This research addresses prior evidence for the existence of non-temperature-dependent shifts in d18O of precipitation in the early Holocene attributed to changes in atmospheric circulation. The validity of this hypothesis is tested through the development of oxygen-isotope records from lake sediments and their interpretation in the context of independent reconstructions of temperature and precipitation from pollen and chironomid head-capsules collected from the same or nearby sites, and well-documented changes in vegetation composition. Records of carbon and nitrogen elemental content and isotopic composition and magnetic susceptibility are included in this multi-proxy investigation. Extensive modern isotope hydrology datasets spanning several years at four of the five sites also help to inform interpretations of the cellulose d18O records. Key results from this research are: 1) Elevated d18O in relation to prevailing temperature occurred during the early Holocene (c. 10,000-6000 cal. BP) for sites in northern Fennoscandia (Lake Tibetanus, Lake Spåime), in harmony with previous interpretations suggesting that strong zonal atmospheric circulation led to deepening of the precipitation and isotope shadows in the lee of the Scandes Mountains. 2) Evidence from a southern site (Arbovatten) reveals a previously unrecognized negative offset in the d18O-temperature relation during the early Holocene, apparently transferred directly from the North Atlantic without the orographic effects associated with a topographic barrier. 3) The modern d18O-temperature relation appears to have been established throughout Fennoscandia by c. 6000-4000 cal. BP, probably due to generally weaker circumpolar atmospheric circulation in response to lower summer insolation. 4) Comparison of two sites (Lake Spåime, Svartkälstjärn) in a west-east transect across central Fennoscandia reveals higher-frequency variability in atmospheric circulation at submillennial scales throughout the Holocene, which appears to be analogous to contemporary variability in the North Atlantic Oscillation (NAO) at seasonal-to-decadal time-scales. Evidence of such NAO-like variability also exists at two northern sites (Lake Keitjoru, Oikojärvi) during the Holocene, likely reflecting variations in summer and winter atmospheric circulation. 5) Complex lake-specific changes in productivity occurred in response to Holocene climate change, as revealed by carbon and nitrogen elemental and isotopic data in lake sediments. A major shift in atmospheric circulation pattern occurring at c. 4000 cal. BP probably led to a reduction in soil-derived 13C-depleted nutrients in five lakes (Lake Keitjoru, Oikojärvi, Lake Spåime, Svartkälstjärn, Arbovatten) associated with changes in terrestrial vegetation. Changes in sediment nitrogen isotope composition also occurred in these lakes at c. 4000 cal. BP, possibly reflecting changing nutrient supply dynamics because of enhanced nitrogen losses during spring snowmelt.