Synthesis and Chemistry of Isoprekinamycin and Analogues 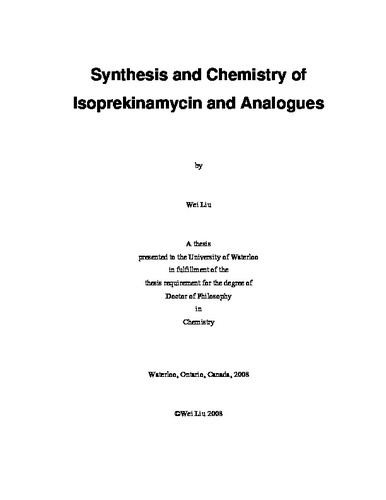 A methodology was studied to set up the benzo[a]fluorene skeleton, which provides a potential route to the total synthesis of isoprekinamycin (IPK) (1-112) and analogues of this natural product that contains an unusual diazo group so as to study the relationship of the structure and bioactivities. Basically the strategy involved a Suzuki coupling between the bromoindenone 2-64 as an AB ring building block and the pinacol boronate 2-89 as a D ring building block to generate a diaryl intermediate 2-90 that incorporates the A, B and D ring of isoprekinamycin. The diaryl intermediate was cyclized via a Dieckmann-like reaction to provide the full ABCD benzo[a]fluorene ring system that incorporates a cyano group at the carbon atom intended to become the carbon of the diazo group in the final structure. This intermediate was subjected to a sequence of reactions involving hydrolysis of the cyano group to the amide followed by a modified Hofmann rearrangement that provided the C-N bond at the correct position for creation of the diazo group in a three step sequence. This methodology provided a model of IPK 2-58 with the longest linear path of the synthesis being thirteen steps and in a 7% yield overall. A total synthesis of IPK which followed the method developed in the model synthesis was then attempted. In this IPK synthesis, the key Dieckmann-like cyclization that proceeded very selectively in the model synthesis proved to be problematic as a result of a competing aldol reaction involving the B-ring ketone group. This problem was eventually solved by reducing the ketone with LiAlH(n-Bu)(i-Bu)2 to produce a reduced aluminate intermediate which served as a protecting group through several steps to the full benzo[a]fluorene system that provided a sample of IPK, after appropriate functional group modification. The synthetic compound was shown to be identical with a sample of the natural product. The synthesis represents the first total synthesis of IPK and was achieved with an overall yield of 6% and the longest linear path being fourteen steps. An examination of the crystallographic data for the model compound 2-58 and IPK provided structure confirmation of the proposal that the diazonium ion character of the diazo group in IPK is enhanced by the presence of intramolecular H-bonding An analogue of IPK was designed, incorporating a side chain at C3 of the D ring in order to improve solubility and potentially the affinity of the molecule for DNA. An intermediate 4-74 that contains a carbamate group intended to serve as the precursor of the diazo group of the IPK analogue, was synthesized using the same strategy as the model of IPK through eleven steps in 14% yield overall. Another benzo[a]fluorene 5-28 was synthesized in 6% overall yield, via an eleven steps sequence initiated from commercial available 3-methylsalicylic acid. This benzo[a]fluorene is intended to be a key intermediate for the total synthesis of fluorostatin A and for the synthesis of analogues of IPK with a side chain at the C4 of the D ring. A discussion of potential significance of the proposed analogues and how they might be best achieved synthetically from the intermediates prepared in this study is provided.