Effects of Aging in Pointing to Visible and Remembered Targets 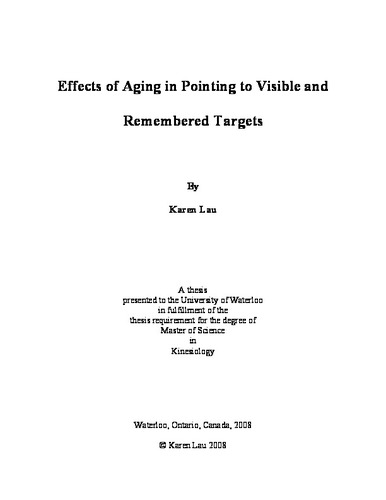 Most studies that have compared pointing to visible versus remembered targets have involved situations when both the limb and target are present (closed loop-target present), or when both the limb and target are occluded (open loop-target absent). This comparison confounds vision of the target with vision of the hand. In order to dissociate these two sources of visual information in pointing, it is necessary to examine conditions in which only one of these sources of information is occluded, that is, when only vision of the hand (open loop-target present) or vision of the target (closed loop-target absent) is occluded. Some studies have compared subsets of these four conditions to examine, for example, the role of vision of the hand in pointing where the target is present throughout the movement but vision of the hand is occluded (open loop) or not (closed loop). Very few studies to date have compared all of these conditions to examine the relative contribution of these two sources of information in pointing. The purpose of this study was to make these comparisons and to examine whether aging had an effect on how these sources of information were used in pointing. To address this, we asked young (N=10, mean age = 21.8 years, 6 females, 4 males) and older (N=9, mean age = 73.8 years, 4 females, 5 males) right-handed adults to point to each of three targets: one situated at the midline and one each at 45 degrees to the left (contralateral) and right (ipsilateral) of the midline, while manipulating whether participants had vision of their pointing limb, the target, or both. In target-absent trials, the time between target occlusion and movement initiation was also manipulated (movement initiation immediately after occlusion or following a delay of 2 seconds) to examine the time course of the representation of target information in memory. All conditions were randomized between each participant. Results showed vision of the limb significantly affects the movement in a positive manner, such that endpoint error and variability were less than conditions in which the limb was not available during movement. This was true for both target present and absent actions, suggesting limb vision provides crucial visual and proprioceptive information to result in a much more precise and consistent movement to targets. This information may also be more important to the participant than target presence, in terms of accuracy and variability, as there tended to be little differences between target present and target absence trials. Where target presence made a difference was during the decelerative phase of movement time (after peak velocity has been reached), where relatively more time was allotted in this period when the target was visible throughout the movement. Because this time is indicative of online feedback processing, this suggests that vision of the target was contributing some type of information to the movement. Interestingly, there was no significant main effect of age group in this study. However, age did play a role in the way participants moved to the targets. In the directional (x) axis, young adults were more likely to aim to targets that were biased further from their body, whereas elderly adult participants displayed the opposite bias: their accuracy data show they tend to aim closer to their body.