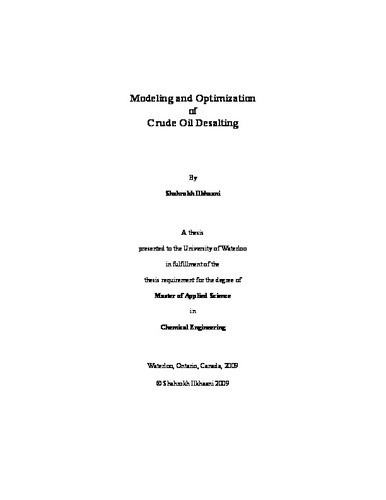 When first received by a refinery, the crude oil usually contains some water, mineral salts, and sediments. The salt appears in different forms, most often times it is dissolved in the formation water that comes with the crude i.e. in brine form, but it could also be present as solid crystals, water-insoluble particles of corrosion products or scale and metal-organic compounds such as prophyrins and naphthenates. The amount of salt in the crude can vary typically between 5 to 200 PTB depending on the crude source, API, viscosity and other properties of the crude. For the following reasons, it is of utmost importance to reduce the amount of salt in the crude before processing the crude in the Crude Distillation Unit and consequently downstream processing units of a refinery. 1. Salt causes corrosion in the equipment. 2. Salt fouls inside the equipment. The fouling problem not only negatively impacts the heat transfer rates in the exchangers and furnace tubes but also affects the hydraulics of the system by increasing the pressure drops and hence requiring more pumping power to the system. Salt also plugs the fractionator trays and causes reduced mass transfer i.e. reduced separation efficiency and therefore need for increased re-boiler/condenser duties. 3. The salt in the crude usually has a source of metallic compounds, which could cause poisoning of catalyst in hydrotreating and other refinery units. Until a few years ago, salt concentrations as high as 10 PTB (1 PTB = 1 lb salt per 1000 bbl crude) was acceptable for desalted crude; However, most of the refineries have adopted more stringent measures for salt content and recent specs only allow 1 PTB in the desalted crude. This would require many existing refineries to improve their desalting units to achieve the tighter salt spec. This study will focus on optimizing the salt removal efficiency of a desalting unit which currently has an existing single-stage desalter. By adding a second stage desalter, the required salt spec in the desalted crude will be met. Also, focus will be on improving the heat integration of the desalting process, and optimization of the desalting temperature to achieve the best operating conditions in the plant after revamp.