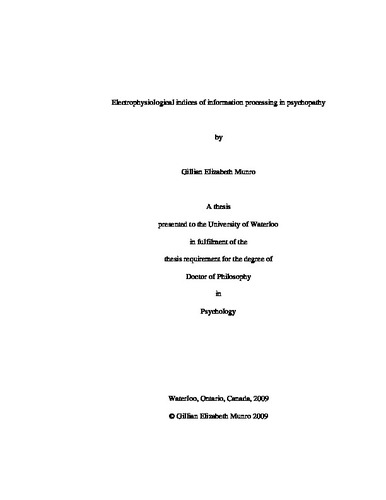 Psychopathy is a severe personality disorder associated with a range of affective, interpersonal, and behavioural abnormalities. Evidence suggests that psychopaths show marked deficits in processing emotional information, although it is unclear whether they also show more general deficits in error monitoring, attention allocation and response control. It is also unclear whether any variation in neurophysiological performance is also reflected in subclinical populations. In this thesis, event-related potentials (ERPs) were used to examine these issues and involved two separate samples. The first included incarcerated offenders with a range of scores on the Hare Psychopathy Checklist –Revised (PCL-R) and non-offender (staff) controls. The second included a large group of healthy undergraduate males with a full range on scores on the Self-Report Psychopathy Scale (SRP-III). Error monitoring was examined in both samples using a standard letter-flanker task and a modified version of the task in which faces with angry or fearful expressions were used instead of the usual letter stimuli. In general, psychopathy in both samples was associated with attenuated ERN amplitudes on the face flanker task only. Source modeling of the ERN indicated that, while the ERN is generally modeled as having a dipole in the ACC, the psychopath group showed no evidence of ACC activity in this region in conjunction with face-flanker errors. These data suggest that the affect-based neurophysiological deficits associated with psychopathy in the clinical range are observed in a graduated fashion among subclinical samples. Inhibitory control processes were also examined in the incarcerated group using the inhibitory N2 and anteriorized P3 as indices of inhibitory processes evident in correctly withholding prepotent response tendencies on a Go-NoGo task. Despite the common assumption that poor inhibitory control is a central aspect of psychopathy, there was no sign that those at higher levels of psychopathy showed any inhibitory control problems and they produced a robust NoGo N2 and P3. In fact, there were signs that the incarcerated offenders who were low on psychopathy were more likely to produce diminished inhibitory-related components. Finally, years of controversy regarding attention allocation deficits in psychopathy was addressed by collecting standard P3 components during a traditional visual oddball task in the university sample. Behavioural response and P3 amplitudes were unrelated to psychopathy. However, consistent with data from incarcerated samples, higher scores on psychopathy were associated with larger amplitude P2 and N5 responses to target relative to nontarget stimuli, again suggesting some continuity with respect to a distinct, although not necessarily deficient, attentional style at subclinical levels of psychopathy. In general, across these four data sets, the only clear evidence of impaired processing involved a reduced error-monitoring response during the face-flanker task when emotional stimuli formed the basis of the required discrimination and this reduced response was found to vary with the degree of psychopathy even within a subclinical range. These findings support a model of psychopathy involving limbic and paralimbic structures rather than a general reduction in neural function affecting error monitoring, attention allocation and response control.