Parents, employment, gender and well-being: a time use study 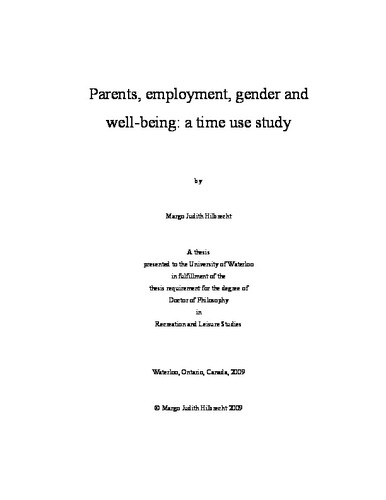 Transformations in the economy have led to changes in employment practices that can create a mismatch between parents’ work schedules and family routines. At the same time, approaches to child-rearing have become more time-intensive, with expectations of increased parental involvement in all aspects of children’s lives compared to previous generations. Mothers are subject to a more intensified maternal role and for fathers, the provider role is no longer sufficient. There are strong social pressures for more active participation in children’s lives and to nurture greater emotional connectivity in the parent-child relationship. These transformations in parenting and employment practices have contributed to a situation where parents now report increased levels of time pressure and greater dissatisfaction with the balance between work and the rest of their lives. The purpose of this study was to develop a broader understanding of how mothers and fathers with school-age children allocate their time, how it varies by household composition, season of the year, and work schedule, and how time use is related to subjective well-being. Given the role that leisure may play in creating a more satisfactory work-life balance, special attention was given to the amount of time available for leisure, with whom this time was spent and the relationship to quality of life. The gender relations perspective provided a theoretical framework since role expectations and experiences of parenthood differ for mothers and fathers. By considering individual, interpersonal, institutional and socio-historical levels of influence, patterns of behaviour may be better understood within the Canadian social context. This study is a secondary analysis of the 2005 Canadian General Social Survey, Cycle 19. Using a sub-sample of 2,062 parents of school-age children (ages 5-17 years), patterns of time use and perceptions of quality of life were assessed and compared by gender according to household composition, season of the school year, work schedule and flexible work option. Work schedules were categorized as traditional (daytime, no weekends), non-standard (evening, weekend and rotating shifts) and irregular (unpredictable, with “on call”, casual, or other irregular patterns). Gender inequality in the allocation of time to important life spheres remained substantial even when faced with very complex challenges in coordinating employment arrangements, family routines, and the school year schedule. With the exception of single fathers, men spent more time on employment-related activities than women regardless of work schedule, while women continued to perform greater amounts of domestic and child care activities. Combined workloads of paid and unpaid labour were significantly different only among single mothers and fathers. For married or cohabitating parents, the distribution of paid and unpaid labour was asymmetrical but the combined workload was not significantly different. Fathers continued to be privileged with greater amounts of leisure time. This was especially noticeable for men with non-standard work schedules and fathers of teenage children. Seasonal differences in time use indicated that women’s routines were more linked to the school year than men’s because of their greater child care responsibilities. When irregular or non-standard schedules were in place that could create more optimal conditions for reconsidering time allocation, parents still followed activity patterns that reproduced traditional gender roles. For women, non-standard schedules were the most detrimental to quality of life, whereas for men irregular schedules decreased well-being. Flexible schedules also perpetuated inequality in the distribution of paid work, unpaid work and leisure although quality of life actually improved for women. This improved quality of life may be attributable to more time spent on activities with physical health benefits or increased options for daily schedules, but it also leads to questions about how much control mothers actually have over their time and whether they recognize or care to challenge the inequalities that persist in the distribution of labour and leisure. Quality of life was diminished by conditions that contributed to a deviation from traditional role expectations. Some of these included not having a partner, women’s work schedules that conflicted with other family members, and for men, having an irregular and unpredictable work schedule. Since these conditions are characteristic of a sizable minority of Canadians parents, their experiences should not be dismissed but rather given greater attention. Additionally, future discussions of work-life integration should consider access to leisure since time for leisure was shown to contribute to parents’ quality of life. The gender relations perspective proved to be helpful in interpreting and understanding the dynamics of time use and behaviour. The four levels of interaction were highly interconnected, but changing institutional conditions such as employment schedules did not lead to greater equality. Instead, non-traditional work schedules widened the gender gap, particularly for child care and domestic activities. Dominant parenting practices were shown to be so deeply imbedded that stereotypical patterns remained a prevailing force guiding men’s and women’s daily activities. The GSS data, despite some limitations, provided considerable insight into the effect of parents’ employment and gender on time use and well-being. The findings of this study underscore the relevance of considering multiple levels of influence when assessing parenting practices, gendered behaviour, and quality of life for employed parents.