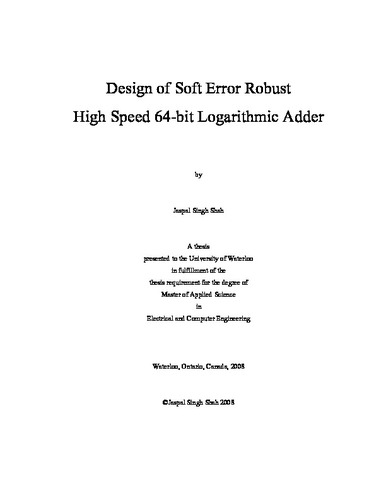 Continuous scaling of the transistor size and reduction of the operating voltage have led to a significant performance improvement of integrated circuits. However, the vulnerability of the scaled circuits to transient data upsets or soft errors, which are caused by alpha particles and cosmic neutrons, has emerged as a major reliability concern. In this thesis, we have investigated the effects of soft errors in combinational circuits and proposed soft error detection techniques for high speed adders. In particular, we have proposed an area-efficient 64-bit soft error robust logarithmic adder (SRA). The adder employs the carry merge Sklansky adder architecture in which carries are generated every 4 bits. Since the particle-induced transient, which is often referred to as a single event transient (SET) typically lasts for 100~200 ps, the adder uses time redundancy by sampling the sum outputs twice. The sampling instances have been set at 110 ps apart. In contrast to the traditional time redundancy, which requires two clock cycles to generate a given output, the SRA generates an output in a single clock cycle. The sampled sum outputs are compared using a 64-bit XOR tree to detect any possible error. An energy efficient 4-input transmission gate based XOR logic is implemented to reduce the delay and the power in this case. The pseudo-static logic (PSL), which has the ability to recover from a particle induced transient, is used in the adder implementation. In comparison with the space redundant approach which requires hardware duplication for error detection, the SRA is 50% more area efficient. The proposed SRA is simulated for different operands with errors inserted at different nodes at the inputs, the carry merge tree, and the sum generation circuit. The simulation vectors are carefully chosen such that the SET is not masked by error masking mechanisms, which are inherently present in combinational circuits. Simulation results show that the proposed SRA is capable of detecting 77% of the errors. The undetected errors primarily result when the SET causes an even number of errors and when errors occur outside the sampling window.