Modeling and Analysis of Multilateral Negotiations 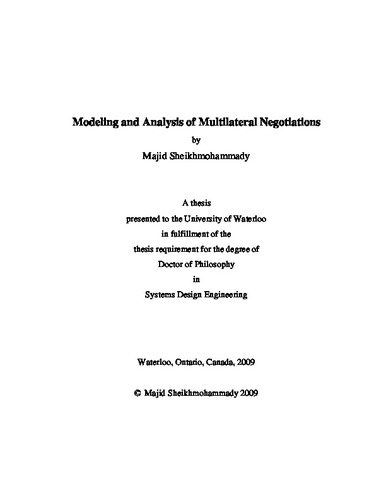 Abstract The modeling and analysis of multilateral negotiations are studied under the assumption that reaching an agreement is the main objective of the negotiators. A new methodology and associated definitions are proposed to predict the outcomes of such negotiations. The general objective of the new methodology is to study movements from one state to another in multilateral negotiations, to predict stable agreements, and to study their properties. The assumptions that the set of possible agreements is discrete and specified in advance make the negotiation problems considered here distinctive. Each decision maker has two concerns: first, achieving an alternative that is as preferable as possible; second, building support for this alternative among the other decision makers. In summary, this research consists of a systematic investigation of multilateral negotiations with the following general characteristics: • Decision makers in the negotiation seek a resolution that is not only feasible but also stable (enduring). Of course, each negotiator tries to attain the most preferable agreement for himself or herself. • If an agreement is reached, it must be an alternative from a pre-specified list, and all of the decision makers must accept the agreement. • Decision makers can possess different levels of power (or legitimacy) in support of an agreement, so the negotiation is not necessarily symmetric. Moreover, the analysis makes use of the decision makers’ preference orders over the proposed alternatives only, and does not require cardinal representations of their preferences. New concepts including State, Acceptability, Feasibility, Stability, and Fallback Distance are defined to pave the way for the proposed methodology. It is based on four types of movements, from unstable states toward stable ones, including preferential improvement, agglomeration, disloyalty move, and strategic disimprovement. Some criteria and algorithms are proposed to measure the likelihood of different moves and different outcomes. An important theorem shows that all four types of movement are mutually exclusive. The evolution of a negotiation from its status quo to the most likely outcomes is illustrated, using a tree. Several applications demonstrate that the proposed methodology can be applied to identify the most likely outcomes of a multilateral negotiation. Sensitivity analyses can be applied in several different ways to assess whether sudden or unforeseen changes in the model affect the conclusions. Several methods can be used from the literature for predicting the outcome of a negotiation. Social Choice Rules, Fallback Bargaining Procedures, and Bankruptcy Solutions are applied to the current negotiations over the legal status of the Caspian Sea to predict or recommend the most appropriate resolution among the proposed alternatives. In addition, the applicability of Graph Model for Conflict Resolution and its associated decision support system (DSS), GMCR II, are briefly discussed. Reasons why these methods are not appropriate when reaching an agreement is the main objective of decision makers (DMs) are then put forward. Based on the conceptual model for multilateral negotiations proposed in this thesis, a practical Negotiation Support System (NSS) is designed and implemented in Microsoft Access using Microsoft Visual Basic. This NSS increases the speed and accuracy of calculations. In the output of this NSS, all movements from initial states to subsequent states and their associated likelihoods are clearly illustrated, and all stable agreements are distinguished. Two real-world multilateral negotiations, over the legal status of the Caspian Sea and over the Epton site brownfield redevelopment project in Kitchener, Ontario, Canada, are modeled and analyzed using the proposed methodology. To measure DMs’ weights quantitatively in the Caspian Sea negotiations, eleven criteria that can be considered to be important determinants of countries’ capabilities are discussed, evaluated, and integrated using a Multiple Criteria Decision Analysis model. The Data Envelopment Analysis (DEA) method is employed to find the most favourable set of relative importance of different criteria for each country. Applying the proposed methodology indicates that unanimous agreements over the division of the Caspian Sea, either based on the International Law of the Seas or based on Soviet maps, are most likely as the enduring legal status of the Caspian Sea. The objective of applying the proposed methodology to actual negotiations over the redevelopment of a brownfield project is to ensure that the new methodology is flexible enough to model more real-world cases. Moreover, we wanted to test how well the actual outcomes of the real world negotiations match the most likely outcomes identified by the methodology. The results show that the decisions on the use of the Epton site followed the most likely path described and predicted by the model. This thesis is multidisciplinary in nature. It utilizes different branches of knowledge, including applied mathematics (game theory), computer science and programming, international relations, and environmental management. However, negotiation modeling and analysis in this thesis is developed from a systems engineering perspective.