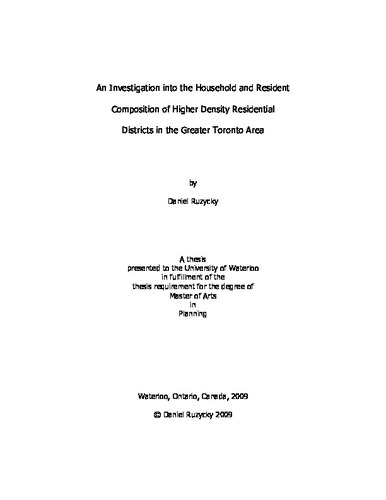 The intensification of existing urban areas has become a common strategy used by planners to combat the negative aspects associated with unrestrained urban growth. This paper investigates the cultural and socio-economic characteristics of higher density households and residents of both owned and rented tenures in the Greater Toronto Area’s three constituent urban zones, the central city, the inner suburbs and the outer suburbs, between 2001 and 2006. Canada census data at the dissemination area level is used to produce descriptive statistics for the 100 variables included in the analysis. Although research relating to higher density housing is abundant, the consideration and affirmation of higher density housing sub-markets in the Greater Toronto Area based on location and tenure makes this study unique. It becomes clear that the diversity of the higher density housing market must be regarded during the planning process. The findings will be useful to planners for the purposes of infrastructure planning, community planning and aid in the implementation of urban intensification strategies in the Greater Toronto Area.

Daniel Ruzycky (2009). An Investigation into the Household and Resident Composition of Higher Density Residential Districts in the Greater Toronto Area. UWSpace. http://hdl.handle.net/10012/4198