The Graphs of HU+00E4ggkvist & Hell 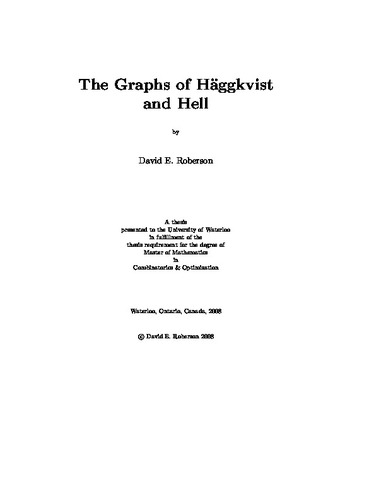 This thesis investigates HU+00E4ggkvist & Hell graphs. These graphs are an extension of the idea of Kneser graphs, and as such share many attributes with them. A variety of original results on many different properties of these graphs are given. We begin with an examination of the transitivity and structural properties of HU+00E4ggkvist & Hell graphs. Capitalizing on the known results for Kneser graphs, the exact values of girth, odd girth, and diameter are derived. We also discuss subgraphs of HU+00E4ggkvist & Hell graphs that are isomorphic to subgraphs of Kneser graphs. We then give some background on graph homomorphisms before giving some explicit homomorphisms of HU+00E4ggkvist & Hell graphs that motivate many of our results. Using the theory of equitable partitions we compute some eigenvalues of these graphs. Moving on to independent sets we give several bounds including the ratio bound, which is computed using the least eigenvalue. A bound for the chromatic number is given using the homomorphism to the Kneser graphs, as well as a recursive bound. We then introduce the concept of fractional chromatic number and again give several bounds. Also included are tables of the computed values of these parameters for some small cases. We conclude with a discussion of the broader implications of our results, and give some interesting open problems.