The Structure and Composition of Seasonally Dry Tropical Forest Communities on St. Lucia 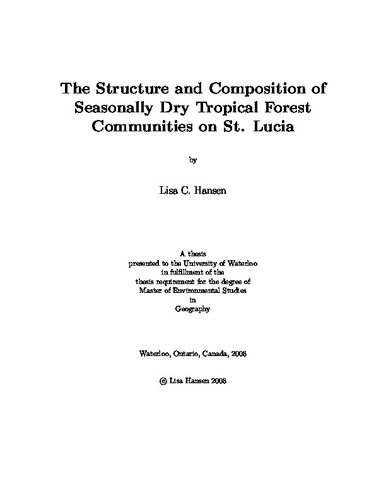 Dry forests of the Caribbean islands are regarded as highly disturbed ecosystems and have been characterized as having a high density of small diameter stems, a lower basal area at maturity and a lower species-richness than continental Neotropical dry forests. However, the emerging view regards these ecosystems as phenologically complex, where taxonomic and structural composition is variable over time and space, due to local hydraulic regimes induced by high topographic and climactic variability and varying forms and intensities of disturbance. The former view is derived from a few studies, the majority of which have been conducted in Puerto Rico and from one data review of small 0.1 ha plots representing 4 sites in the Antilles and 25 sits in the continental Neotropics. Overall, little is known about the less-disturbed dry forest formations of the Antilles. Given the emerging view and lack of research in less-disturbed Antillean dry forests, a case study of dry forest structure and composition on the island of St. Lucia is used to examine heterogeneity in dry forest floristic and structural composition on the topographically, floristically and climactically complex island of St. Lucia. Amongst twenty-two 15 x 15 m widely distributed plots, only 11/64 species/genera were found in >50\% of plots and clustering was observed amongst uncommon species, supporting evidence of floristic heterogeneity. Significant differences between the total basal area of each plot (Kruskal-Wallis test, p <0.05) were observed; each plot differed significantly with at least 2 other plots, 6 differed significantly with 10 or more plots, providing evidence for structural heterogeneity. Comparisons were also made with prior research to question generalizations about Antillean dry forests. Amongst large diameter stems, species richness and stem density was higher in this study, when compared to more-disturbed Antillean dry forests. The most speciose dry forest genus was Zanthoxylum, while four families were found to be equally speciose namely, Myrtaceae, Fabaceae, Rutaceae and Rubiaceae, highlighting inconsistencies with prior generalizations. Species-richness values reported amongst Neotropical dry forests were highly variable amongst similar regions, let alone the continental Neotropics, relative to the Antillean Archipelago. Stem density and basal area in St. Lucia was similar to ranges reported throughout the Neotropics, further supporting evidence for intra-island structural variability. The intra-region heterogeneity observed in Antillean and Neotropical continental dry forests indicates that results from localized plot-based studies of structure and composition, should not be extrapolated to broad geo-political regions.