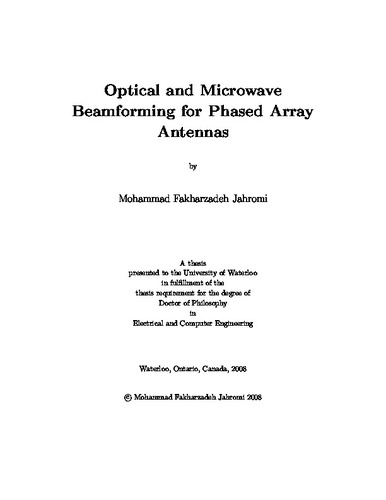 Phased array antenna has been used for a variety of military and civil applications, over the past five decades. Being structurally conformal and flexible, phased array antenna is highly suitable for mobile applications. Besides, it can form the agile or shaped beams required for interference cancellation or multifunction systems. Moreover, the spatial power combination property increases the effective radiated power of a transmitter phased array system. Similarly, in a receiver phased array, beamforming increases the signal to noise ratio by coherent integration of the desired signals. Despite its impressive potentials and properties, phased array antenna has not become a commercial product yet. Cost and complexity of phased array antenna are beyond the scales of consumer electronics devices. Furthermore, calibration is an essential requirement of such a complex system, which is a fairly time-consuming process and requires skilled man power. Moreover, the narrow bandwidth of microwave components degrades the broadband performance of phased array system. Finally, the majority of the beamforming algorithms developed so far have preconditions, which make them unsuitable for a low-cost system. The objective of this thesis is to provide a novel cost-effective solution to minimize the system complexity of the future intelligent antenna systems, without sacrificing the performance. This research demonstrates that a powerful, robust beamforming algorithm, integrated in an efficient single-receiver architecture, constitutes the essence of a low-cost phased array antenna. Thus, a novel beamforming technique, called Zero-knowledge algorithm is developed. It is investigated, both theoretically and experimentally, that the proposed algorithm can compensate for the hardware errors and imperfections of the low-cost components of the system. Zero-knowledge beamforming algorithm possesses significant properties. Neither a priori knowledge of the incoming signal direction, nor the exact characteristics of the phase control network are required in this method. Proper adjustment of the parameters, makes this algorithm appropriate for mobile systems, particularly those installed on vehicles. The algorithm alleviates the drawbacks of analog phase shifters, such as imbalanced insertion loss and fabrication tolerances. Furthermore, this algorithm can serve as the core of a direction-of-arrival estimation technique, which senses the minor deflections of the array heading. For broadband applications optical delay lines must be used in the phase control network of the phased array systems, which are costly. Nevertheless, employing miniaturized delay lines can significantly reduce the device area, and consequently, the fabrication cost. Thus, in this research four types of miniaturized optical delay lines, designed in slow-wave structures, are analyzed, which can provide a large delay per length. In addition, two novel optical beamforming techniques, based upon the properties of Zero-knowledge algorithm, are developed for transmitter and receiver phased arrays.