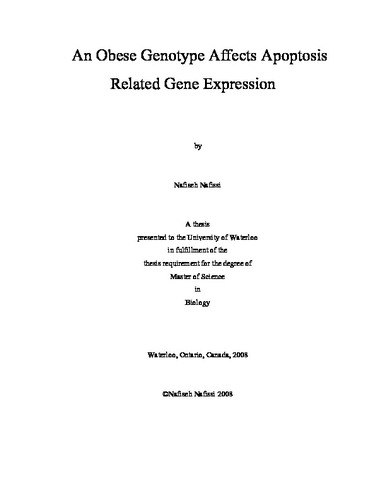 Apoptosis is a genetically regulated form of cell death that occurs when the cell is exposed to physiological, pathogenic, or cytotoxic stimuli. Unregulated apoptosis (too much or too little apoptosis) at any time from embryogenesis to adulthood, can result in a variety of disease states, such as neurodegenerative disorders, autoimmunity, cardiovascular disease, liver and kidney problems, and cancer. A reasonable estimation is that either too little or too much cell death contributes to half of the main medical illnesses for which adequate therapy or prevention is lacking. The apoptotic pathways can be initiated by reactive oxygen species (ROS) and inflammatory molecules, both of which are believed to be up-regulated in a state of obesity. In addition, multiple studies have shown that the risk of developing cardiovascular disease, type 2 diabetes mellitus, nonalcoholic fatty liver disease, and certain types of cancers increase with increasing degree of obesity in both men and women. Despite the well characterized association of obesity and disease incidence, the mechanisms by which obesity contributes to disease pathology are poorly understood. Previously, in our research group, it was shown that obese Zucker rats, which are the animal model of human obesity, are more prone to colon cancer and hepatic steatosis compare to their relative lean counterparts. Therefore, applying Real-Time RT-PCR, the expression levels of some pro- and anti-apoptotic members of the BCL-2 family of genes were investigated to figure out the possible effect of obesity on apoptotic gene expression levels. Also, apoptotic gene expression patterns of obese and lean Zucker rats after DNA damage induction were compared to each other in order to find the possible connection of apoptotic gene expression with disease progression in obese individuals. This is the first study comparing the expression level of BCL-2 family of genes in obese versus lean liver and colon tissue. In this study, it was shown that an obese genotype affects pro- and anti-apoptotic gene expression levels and patterns whether or not DNA damage has been induced in both liver and colon. The results show a clear alteration in apoptotic gene expression levels in obese individuals compared to their lean counterparts leading to the proposal that apoptosis may be involved in the obesity related colon cancer and liver steatosis.