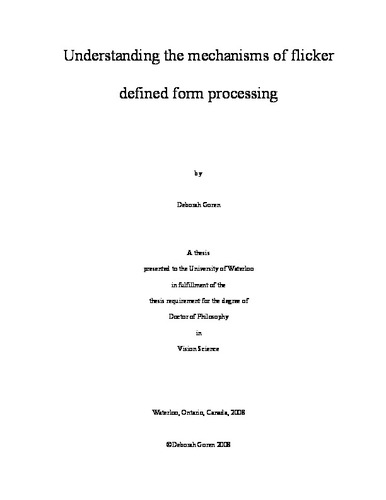 Flicker defined form (FDF) is a temporally-dependent illusion created by the counterphase flicker of randomly positioned element dots, that preferentially stimulates the magnocellular system. Previous studies have found improvement with peripheral presentation, a resistance to blur and a dependence on high temporal frequencies. (Quaid & Flanagan, 2005a; Quaid & Flanagan, 2005b). Although it is seemingly very different from most luminance defined, static stimuli, it is still unknown in what ways it differs. The current study aimed to determine how FDF varies or is similar to static, luminance defined stimuli. Current results showed that FDF could be matched to particular spatial frequencies, and improved with increasing background structure and area. Shapes could be discriminated from each other and recognized. These results suggest that although FDF is dependent on motion pathways for temporal dynamic perception, it could also benefit from the input of form perception pathways, depending on the cues present in the stimulus (e.g. background structure, area). Results also showed that FDF does not benefit from Gestalt rules of contour closure, unlike some static stimuli, although related studies have shown that FDF could still be detected in spite of blur. These studies suggest that FDF appears to rely on motion perception pathways, areas such as MT, but is easier to perceive at times due to overlap in function with shape perception pathways, areas such as IT. As such FDF shares many characteristics with other motion-defined-form stimuli, but uniquely shares aspects of form vision.