A Search For Principles of Basal Ganglia Function 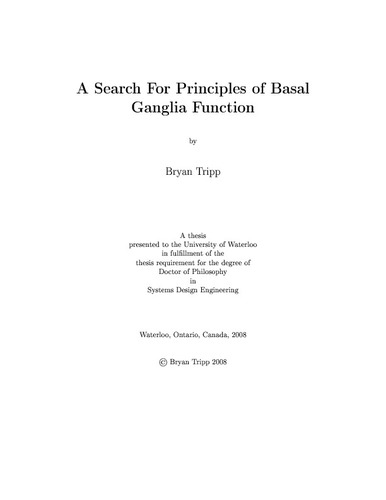 The basal ganglia are a group of subcortical nuclei that contain about 100 million neurons in humans. Different modes of basal ganglia dysfunction lead to Parkinson's disease and Huntington's disease, which have debilitating motor and cognitive symptoms. However, despite intensive study, both the internal computational mechanisms of the basal ganglia, and their contribution to normal brain function, have been elusive. The goal of this thesis is to identify basic principles that underlie basal ganglia function, with a focus on signal representation, computation, dynamics, and plasticity. This process begins with a review of two current hypotheses of normal basal ganglia function, one being that they automatically select actions on the basis of past reinforcement, and the other that they compress cortical signals that tend to occur in conjunction with reinforcement. It is argued that a wide range of experimental data are consistent with these mechanisms operating in series, and that in this configuration, compression makes selection practical in natural environments. Although experimental work is outside the present scope, an experimental means of testing this proposal in the future is suggested. The remainder of the thesis builds on Eliasmith & Anderson's Neural Engineering Framework (NEF), which provides an integrated theoretical account of computation, representation, and dynamics in large neural circuits. The NEF provides considerable insight into basal ganglia function, but its explanatory power is potentially limited by two assumptions that the basal ganglia violate. First, like most large-network models, the NEF assumes that neurons integrate multiple synaptic inputs in a linear manner. However, synaptic integration in the basal ganglia is nonlinear in several respects. Three modes of nonlinearity are examined, including nonlinear interactions between dendritic branches, nonlinear integration within terminal branches, and nonlinear conductance-current relationships. The first mode is shown to affect neuron tuning. The other two modes are shown to enable alternative computational mechanisms that facilitate learning, and make computation more flexible, respectively. Secondly, while the NEF assumes that the feedforward dynamics of individual neurons are dominated by the dynamics of post-synaptic current, many basal ganglia neurons also exhibit prominent spike-generation dynamics, including adaptation, bursting, and hysterses. Of these, it is shown that the NEF theory of network dynamics applies fairly directly to certain cases of firing-rate adaptation. However, more complex dynamics, including nonlinear dynamics that are diverse across a population, can be described using the NEF equations for representation. In particular, a neuron's response can be characterized in terms of a more complex function that extends over both present and past inputs. It is therefore straightforward to apply NEF methods to interpret the effects of complex cell dynamics at the network level. The role of spike timing in basal ganglia function is also examined. Although the basal ganglia have been interpreted in the past to perform computations on the basis of mean firing rates (over windows of tens or hundreds of milliseconds) it has recently become clear that patterns of spikes on finer timescales are also functionally relevant. Past work has shown that precise spike times in sensory systems contain stimulus-related information, but there has been little study of how post-synaptic neurons might use this information. It is shown that essentially any neuron can use this information to perform flexible computations, and that these computations do not require spike timing that is very precise. As a consequence, irregular and highly-variable firing patterns can drive behaviour with which they have no detectable correlation. Most of the projection neurons in the basal ganglia are inhibitory, and the effect of one nucleus on another is classically interpreted as subtractive or divisive. Theoretically, very flexible computations can be performed within a projection if each presynaptic neuron can both excite and inhibit its targets, but this is hardly ever the case physiologically. However, it is shown here that equivalent computational flexibility is supported by inhibitory projections in the basal ganglia, as a simple consequence of inhibitory collaterals in the target nuclei. Finally, the relationship between population coding and synaptic plasticity is discussed. It is shown that Hebbian plasticity, in conjunction with lateral connections, determines both the dimension of the population code and the tuning of neuron responses within the coded space. These results permit a straightforward interpretation of the effects of synaptic plasticity on information processing at the network level. Together with the NEF, these new results provide a rich set of theoretical principles through which the dominant physiological factors that affect basal ganglia function can be more clearly understood.