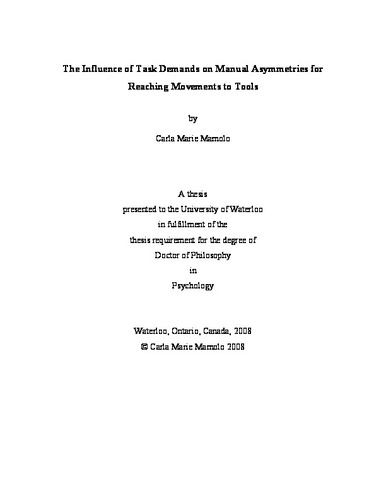 In this dissertation, three experiments were conducted that examined the influence of task demands on manual asymmetries for the performance of reaching movements to tools. In all three experiments, the difference between the hands (in terms of preference for Experiment 1 and performance for Experiments 2 and 3) was studied in response to varying task demands for grasping movements to tools. In the first experiment, 82 right-handed and 60 left-handed university students performed reaching movements to tools and dowels at five positions within working space. Differences in the reaching patterns of the left and right hands to the tools and dowels were examined, as well as the effect of task demands (lift, use) and type of object (tool, dowel) on the reaching patterns. Dowels were used in order to examine if participants would treat a neutral object as if it were a tool in terms of their reaching patterns in working space. Results confirmed and extended prior research on the influence of task demands on reaching patterns within working space. Overall, there were more similarities in the general reaching patterns of left- and right-handed participants than differences. However key differences between the handedness groups emerged in the treatment of the dowel and the frequency of switches (reaching to lift the object with the non-preferred hand and transferring it to the preferred hand to use). Results also showed that tools enjoy a privileged association with the preferred hand, and that the intent of the movement has a very real goal on movement planning. The first experiment examined patterns of hand use across working space in response to differing task demands. In the next experiments performance differences between the hands in terms of movement planning and initiation were examined through the use of reaction time and movement time. In these experiments, reaction time represented the time from the presentation of a go signal to when the participant first lifted their hand, and movement time was the time between lifting the hand to lifting a tool off a sensor. Movement time represented the time to pick up the tool, and did not include the time to use the tool to perform a particular task and complete the reaching movement. In the second experiment, reaction time and movement time to tools placed at the midline position were examined under varying degrees of advance information using a precue paradigm. Three precue conditions were used which presented advance information on the hand to use to perform the movement (left or right) and/or the task (lift, use, or pantomime) to be performed: (1) both hand and task were cued in advance (Both precue); (2) task only was cued in advance (Task precue); and (3) neither hand nor task were cued in advance (No precue). Twenty-four right-handed university students performed reaching movements to tools under the three different precue conditions. The results of Experiment 2 showed that reaction time was sensitive to the amount of advance information presented in the precue. For reaction time manual asymmetries were observed in one condition only – a right hand advantage was present in the No precue condition. In contrast manual asymmetries in favor of the right hand were clearly observed with the movement time results. Experiment 2 was the first experiment reported in the literature to systematically examine reaction time for reaching and grasping movements to tools. In order to further explore these results, in Experiment 3 a fourth precue condition (in which the hand to be used was cued in advance; the Hand precue) was added to the precue paradigm used in Experiment 2. An additional variable called replacement time, which represented the time spent interacting with the tool, was also examined. Forty-two right-handed university students participated in Experiment 3. The results of Experiment 3 largely replicated the findings of Experiment 2, and indicated that both the amount and type of precue information had an effect on reaction time. The addition of the Hand precue condition suggested that having advance knowledge of the hand to be used to perform the task was of greater importance for movement planning than was advance knowledge of the task to be performed. Regarding the movement time results, Experiment 3 was one of the first experiments to show the influence of task demands on the magnitude of manual asymmetries. The lack of differences between the hands for the replacement time results also suggested that the initial execution of the movement (represented by movement time) was most sensitive to manual asymmetries. Overall, these experiments provided further insight into manual asymmetries for the performance of reaching movements, and illustrated how simple manipulations of task demands led to differences between the hands in measures of both preference and performance when interacting with tools.