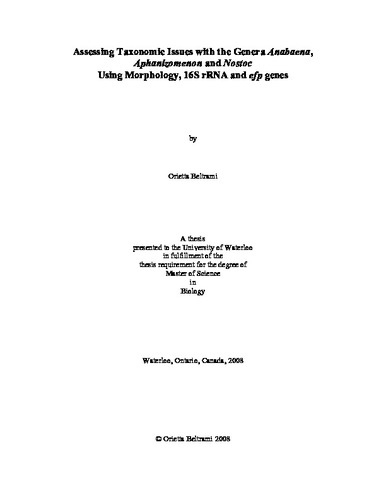 Cyanobacteria are an ancient lineage of gram-negative photosynthetic prokaryotes that play an important role in the nitrogen cycle in terrestrial and aquatic systems. Widespread cyanobacterial blooms have prompted numerous studies on the classification of this group, however defining species is problematic due to lack of clarity as to which characters best define the various taxonomic levels. The genera Anabaena, Aphanizomenon and Nostoc form one of the most controversial groups and are typically paraphyletic within phylogenetic trees and share similar morphological characters. This study’s purpose was to determine the taxonomic and phylogenetic relationships among isolates from these three genera using 16S rRNA and bacterial elongation factor P (efp) gene sequences as well as morphological analyses. These data confirmed the non-monophyly of Anabaena and Aphanizomenon and demonstrated that many of the isolates were intermixed among various clades in both gene phylogenies. In addition, the genus Nostoc was clearly not monophyletic and this finding differed from previous studies. The genetic divergence of the genus Nostoc was confirmed based on 16S rRNA gene sequence similarities (≥85.1%), and the isolates of Anabaena were genetically differentiated, contrary to previous studies (16S rRNA gene sequence similarities ≥89.4%). The morphological diversity was larger than the molecular diversity, since the statistical analysis ANOSIM showed that the isolates were morphologically well differentiated; however, the 16S rRNA gene sequence similarities showed some isolates as being related at the species level. Planktonic and benthic strains were not distinguished phylogenetically, although some well-supported clusters were noted. Cellular measurements (length and width of vegetative cells, end cells, heterocysts and akinetes) were noted to be the morphological characters that best supported the differentiation among isolates, more than qualitative characterization. Among the metric parameters, the length of akinetes resulted in better differentiation among isolates. The efp gene sequence analyses did not appear to be useful for the taxonomic differentiation at lower taxonomic levels, but gave well-supported clusters for Aphanizomenon that was supported by the morphological analyses. Both gene regions gave similar trees with the exception of the Aphanizomenon isolates which clustered together in phylogenetic trees based on the efp gene. This differed from the 16S rRNA gene in which this genus was paraphyletic with Anabaena species that were similar in morphology to Aphanizomenon. Hence, the application of multiple taxonomic criteria is required for the successful delineation of cyanobacterial species.