Finite Element Model of a Two-cell Contact and Separation Experiment 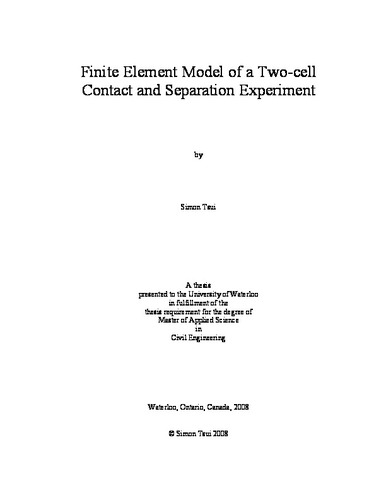 Cell-cell adhesion is important to understanding the mechanics of cell-cell interactions. A recent study of cell adhesion was conducted by others using an Atomic Force Microscopy to measure forces when two cells are brought together and then pulled apart. When the two cells come in contact, the adhesion molecules of one cell bind to molecules of the other cell throughout the contact region. When the two cells are then pulled apart, some of these bonds break off while others lead to the formation of tethers which also eventually also break. These phenomena create a force-time curve, which is difficult to interpret. In order to model this experiment and understand details of the experiments, a series of modules were added to a 2D finite element model used previously to model cells and their mechanical interactions. These new modules were designed to replicate mechanical processes associated with molecular detachments at the cell-cell interface. The enhanced model includes several new types of elements including an InterfaceTruss, which characterizes individual adhesion bonds between two cells. Parametric studies carried out using the new finite element model showed that cytoplasmic viscosity, actin cortex stiffness, and the lifetime of the molecular attachments at the cell-cell interface all affect one or more portions of the force time curve. The model was able to model virtually all of the significant features of the experimental force-time curve, and when suitable parameter values are chosen, the model closely approximates the observed features of the experimental curves. The new finite element model provides an effective tool for investigating features of the cell-cell interface. It also provides a powerful tool for learning about the mechanical properties of the cells and their bonds and tethers and for the design of new cell adhesion experiments.