Recovering the Sense and Essence of Place: The Eastern Practice of Feng Shui and its Role in Western Architecture 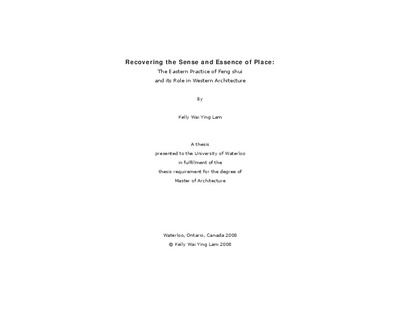 The aim of this thesis is to understand, identify and test the fundamental qualities of feng shui so as to examine its applicability and relevance in western architectural design practice. While the word “feng shui” has gained popularity and even acceptance in North America during the last number of decades, its principles are not well understood or integrated in contemporary western architectural practice. This stands in strong contrast to eastern cities such as Hong Kong where very few structures are built without consulting a feng shui expert. Indeed, feng shui has a long history of contributing to the shaping of Chinese culture, where it is a practice that has influenced the form and planning of Chinese cities, palaces, villages and cemeteries alike. Critical to the practice of feng shui is the understanding of its roots, which reach deep into traditional Chinese observations about nature that are at once profoundly spiritual and practical. These observations led to a belief in the existence of a silent dialogue between man and nature that lies beneath the surface of all things. This dialogue is believed to be carried along by the flow of qi, the Chinese name for energy that animates all forms of life. The optimizing of this energy in order to benefit humankind became a key factor in the widespread popularity of feng shui. Based on these underpinnings it is easy to understand both the allure and mystification surrounding feng shui in western culture. This thesis rests upon the belief that the eastern practice of feng shui offers a long standing alternative approach to the western worldview of architecture, as well as a vastly different way of looking at the relationship between people and the environments they inhabit.

Kelly Wai Ying Lam (2009). Recovering the Sense and Essence of Place: The Eastern Practice of Feng Shui and its Role in Western Architecture. UWSpace. http://hdl.handle.net/10012/4172