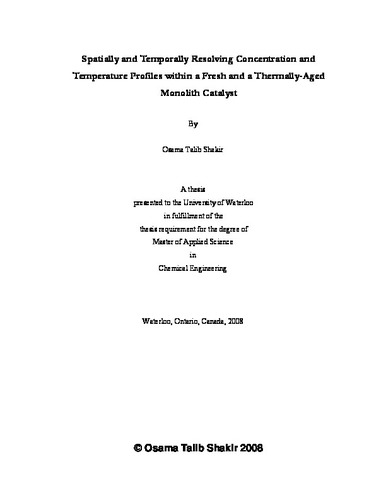 The ability to resolve reactions within a monolith spatially and temporally is key in developing reliable kinetic models, as well as in validating proposed reaction mechanisms. In this work, two techniques, IR-thermography and spatially-resolved capillary inlet mass spectrometry (SpaciMS), were used to measure temperature and gas-phase concentrations. Specifically, they were applied to monitor the axial distribution of temperature and concentration profiles during propylene oxidation over a Pt/Al2O3 monolith-supported catalyst. Also, the effect of thermally aging the catalyst on the temperature and concentration patterns observed was investigated. During temperature programmed oxidation experiments, the data show that conversion of propylene began at the outlet, and a reaction front generated at the rear of the monolith traveled upstream, as a moving reaction zone, thereby creating a temperature wave pattern since the reaction is exothermic. The conversion was always complete downstream of this reaction zone at any point along the catalyst. When the reactor was cooled, the conversion of propylene started to drop, accompanied by a similar temperature wave pattern that traveled in the opposite direction (from upstream to downstream) and was attributed to a phenomenon known as wrong-way behavior. Finally, thermally aging the catalyst led to a slower and more localized moving hot zone.

Osama Shakir (2009). Spatially and Temporally Resolving Concentration and Temperature Profiles within a Fresh and a Thermally-Aged Monolith Catalyst. UWSpace. http://hdl.handle.net/10012/4171