Energy Efficiency Analysis and Implementation of AES on an FPGA 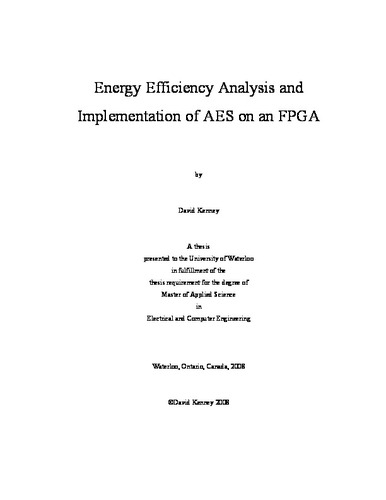 The Advanced Encryption Standard (AES) was developed by Joan Daemen and Vincent Rjimen and endorsed by the National Institute of Standards and Technology in 2001. It was designed to replace the aging Data Encryption Standard (DES) and be useful for a wide range of applications with varying throughput, area, power dissipation and energy consumption requirements. Field Programmable Gate Arrays (FPGAs) are flexible and reconfigurable integrated circuits that are useful for many different applications including the implementation of AES. Though they are highly flexible, FPGAs are often less efficient than Application Specific Integrated Circuits (ASICs); they tend to operate slower, take up more space and dissipate more power. There have been many FPGA AES implementations that focus on obtaining high throughput or low area usage, but very little research done in the area of low power or energy efficient FPGA based AES; in fact, it is rare for estimates on power dissipation to be made at all. This thesis presents a methodology to evaluate the energy efficiency of FPGA based AES designs and proposes a novel FPGA AES implementation which is highly flexible and energy efficient. The proposed methodology is implemented as part of a novel scripting tool, the AES Energy Analyzer, which is able to fully characterize the power dissipation and energy efficiency of FPGA based AES designs. Additionally, this thesis introduces a new FPGA power reduction technique called Opportunistic Combinational Operand Gating (OCOG) which is used in the proposed energy efficient implementation. The AES Energy Analyzer was able to estimate the power dissipation and energy efficiency of the proposed AES design during its most commonly performed operations. It was found that the proposed implementation consumes less energy per operation than any previous FPGA based AES implementations that included power estimations. Finally, the use of Opportunistic Combinational Operand Gating on an AES cipher was found to reduce its dynamic power consumption by up to 17% when compared to an identical design that did not employ the technique.