Climate change and endangered species in Canada: A screening level impact assessment and analysis of species at risk management and policy 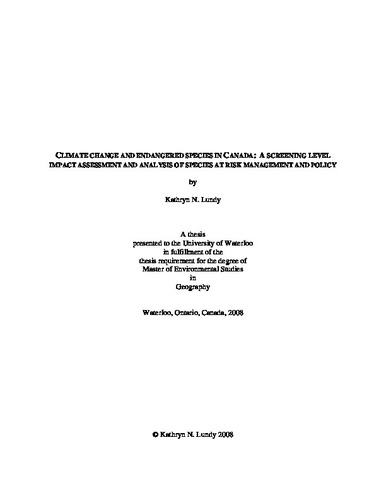 Climate is a long-term driver of ecological change, but the rapidity with which climate is projected to change over the next century may push the limitations of ecological adaptability, to the detriment of biodiversity. Given their typically small populations, limiting biological traits and exposure to external stressors, species currently classified as “at risk” may be among the most vulnerable to climate change and least capable of adapting naturally. A screening level assessment of the impacts of climate change on endangered species in Canada was conducted by integrating knowledge of the current status and characteristics of each endangered species with projections of climate change and climate change impacts. It was determined that climate change may have a potential overall negative influence on more than half of all endangered species in Canada. However, while relatively few species were predicted to respond in an overall positive or neutral manner to climate change, a large portion of endangered species were classified as having insufficient information to generate a decision on the net influence of climate change; in many cases, these species were located at the northern extent of their range in warmer regions of Canada and have the potential to experience at least some benefits under climate change provided that other stressors are sufficiently mitigated. These results, as well as the inherent vulnerability of species at risk to environmental change, the potential for species at risk distributional shifts and the likelihood of increasing rates of species imperilment, demonstrate the need for greater consideration of the implications of climate change in species at risk management and policy. Canada’s Species at Risk Act (SARA) does not explicitly address the issue of climate change and limitations exist in SARA’s time-sensitive definition of wildlife species eligible for protection in Canada and in the interpretation of SARA’s mandates in the context of anthropogenically driven climate change. It is recommended that climate change be systematically considered in all species at risk assessments, recovery strategies and management plans and that SARA’s definition of a wildlife species be revaluated in light of shifting species distributions under climate change. Further recommendations to identify “values” that will assist in prioritizing species for conservation, to reassess the concept of an invasive species under climate change and to implement strategies that focus more broadly on the conservation of biodiversity and ecological integrity rather than individual species may require ethically complex discussions and decisions on the part of species at risk managers and policy makers. Future research should focus on informing species at risk management and policy by improving modeling capabilities at the species level, conducting in-depth analyses of priority species, and building knowledge of alternative species conservation strategies such as assisted colonization.