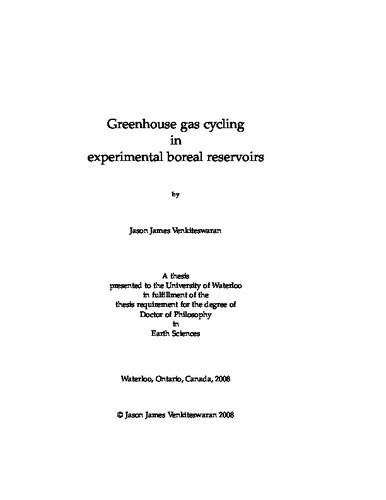 Hydroelectric reservoirs account for 59% of the installed electricity generating capacity in Canada and 26% in Ontario. Reservoirs also provide irrigation capacity, drinking water, and recreational opportunities. Further, they continue to be built in northern Canada, neighbouring boreal countries, and around the world. Yet given their socio-economic importance, they are understudied with respect to greenhouse gas emissions, nutrient and mercury cycling, and aquatic metabolism. As one of many electricity generating options, hydroelectricity is viewed as well-tested because of its long history and diverse applications in mega-projects, run-of-the-river dams, and small, local applications. It is also considered renewable from a fuel stand-point because an adequate long-term supply of water is assumed. One of several significant criticisms of hydroelectric development is that reservoirs may be a significant source of greenhouse gases to the atmosphere relative to the amount of electricity produced due to flooding the landscape. As a result of the dearth of information on reservoir development and both greenhouse gases and aquatic metabolism, a pair of whole-ecosystem reservoir experiments were conducted staring in 1991. Three upland boreal forest reservoirs with differing amounts of pre-flood stored organic carbon were built in northwestern Ontario and flooded for five years. The rates of net greenhouse gas production in these reservoirs were determined by calculating mass budgets for carbon dioxide and methane. Additionally, rates of biological processes were determined by combining the mass budgets with measurements of the stable isotopes of carbon and oxygen. Assembling mass and isotope-mass budgets required three related projects on gas exchange, methane oxidation, and oxygen isotopes. To estimate the gas exchange coefficient for each of the upland reservoirs, a comparative-methods study was undertaken. Methane oxidation enrichment factors were determined in upland and wetland boreal reservoirs so that the importance of methane oxidation in these ecosystems could be assessed. In order to interpret the diel changes in both oxygen concentrations and their isotopic ratios, a dynamic model was developed. This model, PoRGy, was successfully applied to the upland boreal reservoirs as well as prairie rivers and ponds. Further, PoRGy was used to understand the interplay between the key parameters that control oxygen concentrations, to compare aquatic ecosystems, to make quantitative estimates of ecosystem metabolism, and to assess the vulnerability of aquatic ecosystems under various environmental stressors. Carbon isotope-mass budgets were used to conclude that community respiration rates declined quickly in the upland reservoirs and had declined by half over five years. This suggested that the most labile organic carbon is quickly consumed but decomposition continued for the five-year life of the project. Net primary production rates were similar for three years, with a small peak in the second or third year, before declining by half by the fifth year. Together, these results indicated that aquatic metabolism slowed over five years while the reservoirs remained a source of greenhouse gases to the atmosphere each year. Net methane production was greatest in the third year of flooding then decreasing by about half by the fifth year. Methane ebullition also peaked in the third year and declined by two-thirds by the fifth year. Together, these results indicated that methanogenesis was greatest in the third year of flooding. The flux of methane to the atmosphere grew in importance relative to that of carbon dioxide over the five years of the experiment. Community respiration and primary production could not be estimated directly from the oxygen isotope-mass budgets since the oxygen respiration enrichment factor remains poorly constrained. Instead, three estimates were made, each based on a different assumption. In general, these estimates suggested that rates of community respiration and primary production decreased slightly for three years and most rapidly in the final two years. The oxygen isotope-mass budgets provided a new method for assessing and constraining community metabolism and greenhouse gas fluxes to the atmosphere. One of the major hypotheses of the whole-ecosystem reservoir experiments was that pre-flood organic carbon stores less tree boles were positively related to greenhouse gas fluxes. Within the three upland boreal forest reservoirs, this hypothesis did not hold true. Over five years, community respiration in the three reservoirs was within 5% of each other. When methane is included, to assess total greenhouse gas fluxes to the atmosphere, the reservoirs were within 1% of each other. Organic carbon stores were therefore poor short-term predictors of carbon lability and greenhouse gas fluxes. This research presented two methods for determining biological rates at the whole-ecosystem scale: one using carbon isotopes and one using oxygen isotopes. Temporal evolution of greenhouse gas cycling within the upland reservoirs was different than in the wetland reservoir and should inform how reservoir development is done vis-à-vis the amount of flooded land of each type versus electricity production. Medium-term estimates of greenhouse gas fluxes suggest that upland reservoirs do not have adequate pre-flood organic carbon stores to sustain elevated levels of decomposition the way wetlands do. The strong evidence of continued production of dissolved organic carbon in the upland reservoirs should concern operators of municipal drinking water reservoirs since elevated dissolved organic carbon can make disinfection difficult.