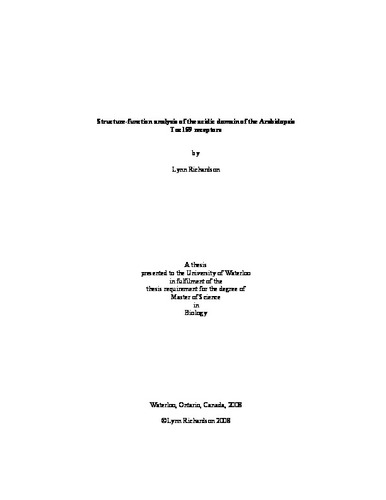 Most chloroplast proteins are encoded in the nucleus and translated in the cytosol with an N-terminal transit peptide, which facilitates recognition by the receptors of the translocon at the outer membrane of chloroplasts (Toc). The Toc159 family of receptors in Arabidopsis thaliana are the primary chloroplast preprotein receptors. Members of this family differentially associate with either atToc33 or atToc34 (“at” designates the species of origin, Arabidopsis thaliana) to form structurally and functionally distinct Toc complexes; atToc159/33-containing complexes import photosynthetic preproteins, and atToc132(120)/34-containing complexes import non-photosynthetic, plastid house-keeping proteins. The Toc159 receptors are most variable in their N-terminal A-domain, suggesting that this domain may contribute to their functional specificity. The A-domain has structural properties characteristic of intrinsically unstructured protein (IUP) domains, including an abundance of acidic amino acid residues, aberrant mobility during SDS-PAGE and sensitivity to proteolysis. The overall objective of this study was to gain insight into the function of the A-domain. First, to investigate the role of the A-domain in the assembly of structurally distinct Toc complexes, full-length, truncated and domain-swapped variants of atToc159 and atToc132 were targeted in vitro to chloroplasts isolated from wild type (WT) Arabidopsis, and atToc33 and atToc34 null mutants (ppi1 and ppi3, respectively). Insertion of atToc132 was less efficient than atToc159, and was not affected by the removal or swapping of the A-domain. In contrast, removal of the A-domain of atToc159 resulted in decreased insertion, most notably into ppi1 chloroplasts, suggesting that the A-domain is important for insertion, especially into atToc34-containing complexes. These results indicate that the A-domain does play a role in targeting, and may also suggest different roles for the A-domain in targeting of atToc159 and atToc132. Second, a structural analysis of the A-domain of atToc132 and atToc159 was performed using CD and fluorescence spectroscopy to gain insight into their potential function(s). The A-domains were found to be unstructured at physiological pH, and their secondary structure increased with increasing temperature and decreasing pH, which are characteristics of IUPs. IUPs are commonly involved in protein-protein interactions, and their unstructured nature may suggest a role for the A-domains in binding transit peptides, accounting for the ability of the Toc159 receptors to differentially distinguish between a large number of diverse transit peptides that possess low sequence conservation.