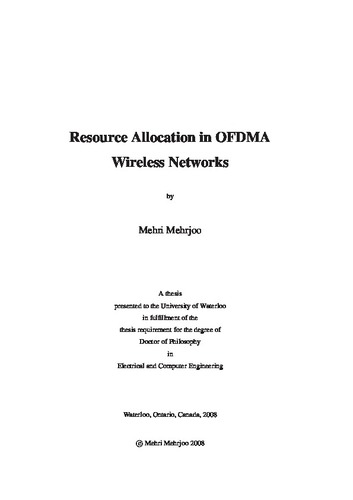 Orthogonal frequency division multiple access (OFDMA) is becoming a widely deployed mechanism in broadband wireless networks due to its capability to combat the channel impairments and support high data rate. Besides, dealing with small units of spectrum, named sub-carriers, instead of whole spectrum, results in enhanced flexibility and efficiency of the resource allocation for OFDMA networks. Resource allocation and scheduling in the downlink of OFDMA networks supporting heterogeneous traffic will be considered in this thesis. The purpose of resource allocation is to allocate sub-carriers and power to users to meet their service requirements while maintaining fairness among users and maximizes resource utilization. To achieve these objectives, utility-based resource allocation schemes along with some state-of-the-art resource allocation paradigms such as power control, adaptive modulation and coding, sub-carrier assignment, and scheduling are adopted. On one hand, a utility-based resource allocation scheme improves resource utilization by allocating enough resources based on users' quality of service (QoS) satisfaction. On the other hand, resource allocation based on utilities is not trivial when users demand different traffic types with convex and nonconvex utilities. The first contribution of the thesis is the proposing of a framework, based on joint physical (PHY) and medium access (MAC) layer optimization, for utility-based resource allocation in OFDMA networks with heterogeneous traffic types. The framework considers the network resources limitations while attempting to improve resources utilization and heterogeneous users' satisfaction of service. The resource allocation problem is formulated by continuous optimization techniques, and an algorithm based on interior point and penalty methods is suggested to solve the problem. The numerical results show that the framework is very efficient in treating the nonconvexity problem and the allocation is accurate comparing with the ones obtained by a genetic search algorithm. The second contribution of the thesis is the proposing of an opportunistic fair scheduling scheme for OFDMA networks. The contribution is twofold. First, a vector of fair weights is proposed, which can be used in any scheduling scheme for OFDMA networks to maintain fairness. Second, the fair weights are deployed in an opportunistic scheduling scheme to compensate the unfairness of the scheduling. The proposed scheme efficiently schedules users by exploiting multiuser diversity gain, OFDMA resource allocation flexibility, and utility fair service discipline. It is expected that the research in the thesis contributes to developing practical schemes with low complexity for the MAC layer of OFDMA networks.