System and plankton metabolism in the lower Grand River, Ontario 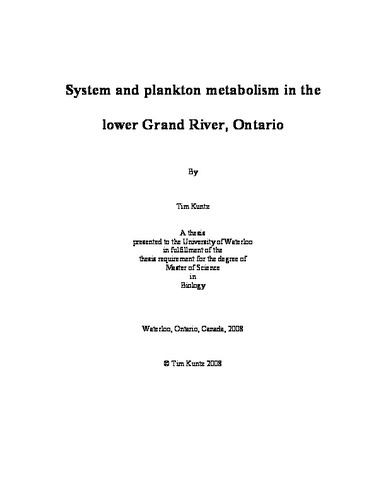 Currently our understanding of both system and phytoplankton metabolism in large rivers is somewhat limited. Knowledge of the metabolic balance in such systems is necessary not only for proper management of the river itself, but also for the lakes into which they discharge. The River Continuum Concept proposes that the deep, turbid waters of large rivers have a poor light climate which leads to heterotrophic conditions (respiration > photosynthesis) yet this idea has been challenged. Similarly, it has been predicted that phytoplankton growth in large rivers is limited to areas of unusually favourable light climate and water retention (e.g. margins, backwaters), but the evidence is limited. Through longitudinal and diel measurements of Chl a, nutrient concentrations, dissolved oxygen and stable oxygen isotopes it was shown in this study that the lower Grand River was autotrophic during the two successive summers but either balanced or heterotrophic in other seasons. This implies that large rivers such as the Grand can be a transition zone for nutrients and a phytoplankton source, depending on season. Experimental incubations to measure oxygen production under varying irradiance demonstrated that phytoplankton could indeed grow (i.e., achieve positive net production) in the main river channel. Comparison of system and plankton metabolic rates further indicated that the phytoplankton were responsible for the major portion of the system production, but much less of the respiration. Sediment oxygen demand probably accounted for much of the additional respiration, but interactions with marginal and upstream habitats was probably an additional influence on both consumption and production of oxygen. The results further showed that stable oxygen isotope dynamics did not conform to the steady state model commonly used to infer metabolic patterns from environmental isotope data. A non-steady model was more successful and largely supported independent assessments of metabolism.